Man Eats His Mother and Says He Dislikes Her Fatty Meat

Sergievsky district court in the Samara region convicted Sergey Gavrilov, a local resident, who murdered and ate his own mother. The criminal had been eating the corpse for a month since he had no means of sustenance after her death. He was sentenced to 14 years and three months of imprisonment in a high security prison, wrote Trud newspaper referring to a local court. 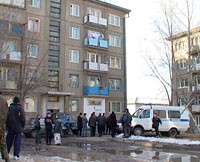 Man Eats His Mother and Says He Dislikes Her Fatty Meat

According to the case papers, a neighborhood police officer came to Gavrilov’s apartment to conduct a search regarding the theft of a cell phone committed by Gavrilov. By that time, 27-year old Gavrilov had been tried four times.

The policeman entered into a dingy, messy apartment with purple walls. On the balcony, he found a stiff female corpse without legs.

Later the police discovered that the legs had been eaten. The scene was so horrifying that even experienced investigators shudder when they think of it, Komsomolskaya Pravda wrote.

55-year old Lyubov Gavrilova went missing a month before the corpse was discovered. The woman’s relatives were worried, but Sergey calmed them down telling them that Lyudmila was in a hospital. The relatives called all local hospitals but could not find the woman.

The habitual criminal later told the investigators that his mother received her pension on January 11. He asked her to give him money for beer since he just came out of prison and had no money. When his mother refused, Gavrilov hit her with a brick in the head and then strangled her with a power cord. He then took the corpse to the balcony and covered it with rags.

Gavrilov spent the victim’s pension in a couple of days on booze and gambling machines. Two weeks later he had nothing to eat. It was well below freezing outside and his mother’s corpse was well preserved on the balcony. Every day he would cut a piece of her legs and cooke soups and pasta sauces.

When the police officer found the corpse, Gavrilov admitted to the murder immediately. “I didn’t like the meat. It was too fatty,” he told to the investigators.

A psychiatric examination ruled him sane. The Russian Criminal Code suggests 15 years of imprisonment for similar crimes. However, Gavrilov’s punishment was mitigated because he pleaded guilty.

State prosecution incriminated him with cannibalism as well, but the court ruled that the criminal ate his mother out of hunger only, and therefore, could not be charged with cannibalism.