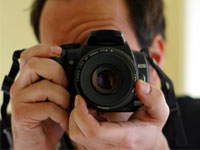 This tragic story began in 2002, when Yelena came to Murmansk from the town of Polyarnye Zori. Soon after the arrival, she met a man who was considerably older and was invited to stay in his apartment. The retiree’s hobby was photography, and at some point he offered Yelena to be his model.

This summer, when Yelena was spending time in Polyarnye Zori, the photographer invited her for another shoot and sent her money for a ticket. The model came over, but when she found out what her “creative task” was, she claimed that it was pornography.

According to Yelena, she was to pose naked at a bus stop while being watched by a child who would be a part of the picture as well. She did not want to pose for the shoot even for extra money.

“When we came back to the apartment, he started hitting on me and was very rude. He even snorted like a pig . It made me very angry ,” she later told to the police . She grabbed a knife from the kitchen and stabbed the retiree in the chest.

She thought he would die immediately, but the man tried to cover his wound with his hand and begged her to call an ambulance.

Then the woman stabbed him in the neck twice to rid him from his suffering, reported Murmansk portal “B-port” referring to the information received from the Media Service of the Investigative Department of Murmansk Prosecution office.

Then the “model” packed her belongings and went back to Polyarnye Zori hoping that the police would never find her. The retiree’s body was found by his daughter and ex-wife whom he promised to meet at a train station but never showed up.

“No one saw the murderer. There were a lot of theories but none of them confirmed,” said Dmitry Dyshin, the case investigator.

The only lead the police had were numerous nude pictures of different women found in the retiree’s apartment. The police found out that the pictures were taken by the victim himself, and that he used his acquaintances as models.

“We found photo albums with pictures of more than 20 women. Some of them were sheer pornography. We decided to check all women in the pictures,” Dyshin said.

The police managed to find most of the women, but none of them seemed to be a murderer. The investigation had reached a dead end when Yelena involuntarily provided her help.

Policemen from Polyarnye Zori informed their Murmansk colleagues that one of the residents of the town told her friends that she had murdered her lover in Murmansk and was suffering from nightmares.

The police of the two cities combined their efforts and arrested the suspect. During an interrogation Yelena pleaded guilty.

She was charged with murder. The investigation is now completed and the case is transferred to court. Yelena is facing up to 20 years of imprisonment.