Moscow’s Domodedovo International Airport has been polluting a small river with kerosene for two years. A cigarette butt thrown into a pond near the river set the pond on fire. The water was burning in it as it was a fairy tale. The fire-fighting team proved to be helpless. Eye-witnesses could not do anything either to put the fire down – they could only film the fire with their cell phones, Vesti-Moskva TV channel said. 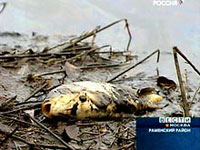 The pond was burning in the village of Selvachyovo. The strong smell of kerosene appeared in the village several days ago. Local residents stared complaining of nausea and headaches. They tried to contact emergency services, but all of their requests were ignored. The people eventually decided to open the dam and empty the pond, but the inflammable liquid would flow into the pond again.

Everyone living in the village, including the officials of the local administration, were aware of the drain in which kerosene and engine oil were flowing into the pond.

It is an artificially made drain. The toxic pipe starts on the territory of Domodedovo Airport. Nitrite-ion exceeds the norm 753 times, petroleum products – 60 times, ammonia – nearly 40 times.

The local authorities have been trying to solve the problem with the administration of the airport, but two years of correspondence brought no results. The airport administration promised to look into the problem and do something about the kerosene pipe.