Young Model Arrives in Moscow to Have Her Organs Sold

A man who tried to sell a young woman for her organs was arrested in the south-west part of Moscow. Temur, a 29-year old citizen of Tashkent, brought his 18-yearl old relative to Moscow with the intentions of making €50,000 from her. 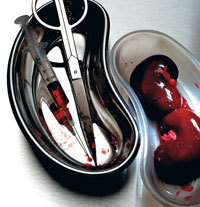 Young Model Arrives in Moscow to Have Her Organs Sold

The police uncovered the organ trafficker accidentally, during another investigation, Marina Molokova, head of the media department of the Moscow Ministry of Internal Affairs, told Pravda.ru.

To arrest the criminal, policemen introduced themselves as buyers interested in human organs.

At first, the seller priced the woman at €100,000, but then agreed to make a discount and sell her for half of the price. The “generous” seller offered to sell a couple more people, likely in bulk.

The policemen gave Temur some time to think and reconsider his decision to sell his relative, but he was determined to go through with the deal. The seller and the “buyers” met a few days later on Leninsky prospect in Moscow near a restaurant.

Temur brought Karina, the victim. However, instead of €50,000 he received a ward in jail and was charged with human trafficking.

Karina was shocked to learn what Temur was going to do with her. The police found out that the woman had no idea that her organs could be sold. She came to Russia to become a model, and Temur, whom she knew a little over a year, offered her his help in conquering Moscow. He even managed to earn the trust of her parents. He promised them to help their daughter and took her to Moscow.

He requested that Karina undergoes medical tests explaining that it would be helpful and will prove potential employers that she is capable of working long hours.

In reality, the criminal intended to show the results of medical tests to organ buyers as a proof of high-quality “goods.”

Prior to his meeting with the undercover “buyers,” Temur told Karina that he was taking her to meet with representatives of a modeling agency.

If Temur were to meet with real buyers, Karina would never be able to have a modeling career or see her parents again.

Karina was saved by sheer accident that helped the police to find Temur. However, not all victims of organ traffickers are that lucky.

Every year thousands of people are forced to become organ donors against their will. According to the United Nations, every year 3,500 to 7,000 (5 to 10 percent) of 68,000 kidney transplants are the results of illegal organ trafficking.

Today, the so-called “transplant tourism” is the most serious threat. Patients travel to the countries where commercial transplants are allowed and donors’ rights are not protected, and receive donor organs without red-tape and long waiting periods.

Therefore, recently, the UN and the European Council suggested the development of an international convention that would prohibit selling organs, tissue and cells throughout the world.