A horrible murder of an elderly man was committed by teenagers in the Russian Far East. Out of curiosity, the teenagers cut the man’s chest open to study his internal organs. 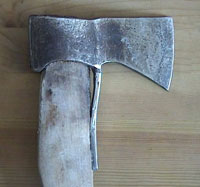 Two teenagers, age 12 and 13, were arrested last Sunday. However, they were released after being interrogated because they are minors. According to Regnum News Agency, earlier that day the mutilated body of the 59-year old man was found in a house in the city of Alexandrovsk-Sakhalinsk. Immediately after, two teenagers, Sergey K. and Aleksey G., were arrested.

The investigators said that the kids came into the house of the retiree who was known for his excessive alcohol consumption. The guests drank together with the man, and later got into a fight. The teenagers attacked the retiree and started beating him. As the teenagers explained later, they wanted to see what his internal organs looked like. They cut the man’s chest open with an axe while he was still alive, took his heart out and watched it beat. Then they cut off the man’s ear, pierced his eye, and left.

After the interrogation, the kids were given back to their parents since they are under 14 and cannot be prosecuted.