Special services of many countries are panicking. Terrorists invented a new way of blowing people up bypassing all security cordons. Suicide bombers no longer use belts with explosives, but instead hide them in their own bodies, more specifically, shove them into their rectums. 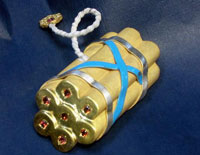 Al Qaeda leaders were bragging about the new experiment in a video address released in the beginning of September, soon after the terrorist attack in Jeddah, Saudi Arabia. In the video, 23-year old Abdullah bin Hassan bin Taleh Assiri showed a metal cylinder filled with explosives and a detonator saying he would soon blow it up.

At the end of August, Assiri called the chief of the Saudi Arabian anti-terror ministry, Prince Mohammed bin Nayef. He stated that he wanted to surrender to officials and repent in the presence of the minister. Prior to the meeting with the prince, the militant was carefully searched but nothing suspicious was found. It turns out that they didn’t search him well enough. A mini explosive device equipped with a sim-card and a primitive electronic scheme was hidden in Assiri’s rectum. It was activated by a phone call of Assiri’s accomplices.

However, their calculations were off, and the suicide bomber didn’t have enough time to reach the prince. The explosion ruined the floor in the room. The terrorist was blown into 70 pieces, and the prince was slightly injured.

If this know-how is widely used, airline passengers will be the first people to be threatened. Only an X-ray can detect an explosive in the rectum. However, not every airport can provide such X-rays. Besides, frequent X-rays can be very harmful for the health of frequent flyers.

There is a way out. We have to be prepared that soon another safety measure will be added to airport metal detectors, emptying pockets, and removing belts and shoes. Passengers will be checked by special scanners with millimeter-wave that are safe in terms of radiation, but capable of detecting foreign objects in human body.

“Why terrorists decided to transport explosives in their rectums versus stomachs? I think it’s because the stomach has a very aggressive acidic environment that can ruin explosives. As for weight, up to one kilogram of plastic explosives can be placed in the rectum,” surgeon Sergey Goryachev said.

“The explosive yield of one kilogram of plastic explosives is 20-25 percent higher. If, for example, a terrorist will lean his butt against an airplane wall, it can blow up and cause depressurization of the aircraft. A catastrophe will be inevitable.

Terrorists believe that in a crowd “rectum explosion” is not very effective. It can kill one or two people close to a suicide bomber and badly injure and burn three or four people, who would survive. But if plastic explosives are filled with cut nails, screws and other metal components, the effect will be different. A terrorist’s butt will “spit out” the metal fragments in a 30 to 40 degree area and will injure many people,” bomb technician Andrey Semipalov said.