Night Club Closed Because of Sex Party and Fire Extinguishers 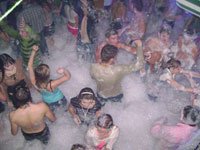 Night Club Closed Because of Sex Party and Fire Extinguishers

The owners of the club said that they did not know how the underage woman had entered the club: they checked IDs of every visitor. It was also rumored that the woman had made her way inside the club through a window.

Local law-enforcement agencies did not leave the scandalous situation out of their attention and closed the club. However, it was not the naked women, but fire extinguishers that were used as the reason to close it. The police inspected the establishment and found gross violations of safety rules.

“They picked at little things. They noticed that the fire extinguishers were not numbered here, although they are in order and have not expired. If we manage to reopen the club, we will be more careful,” Alexander Agapiyev, the director of the club said.

The police of Syktyvkar most likely decided to choose the easiest way to solve the problem quickly.

“To charge someone with the distribution of pornography, one has to conduct an investigation, to attend court hearings – this is a very long process. It is much easier to go down to fire safety rules. This is a way of pressure that law-enforcement agencies may often use,” local lawyer Galina Lozhakova said.

The star of the controversial sex party still goes to school as if nothing happened. Teachers try not to recollect the incident in the club not to hurt the child.