Dead Body Flies on Board Jetliner for Five Days Unnoticed

Airbus A-320 bound for Russia’s Khabarovsk and Vladivostok landed at the airport of Vladivostok, the Far East of Russia, on Sunday, at about 10:00 a.m. When passengers disembarked from the plane, technicians stated their regular inspection. They were shocked to see a hand hanging out from the hull of the jetliner. The police found the body of a man in the left wheel-well of the landing gear. 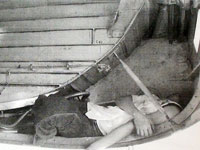 Dead Body Flies on Board Jetliner for Five Days Unnoticed

“It is the body of a male who looks like a 20 or 25-year-old man. He was found in the niche of the left landing gear unit. The position of his body was natural, which means that the man climbed into the unit himself. Most likely, he died of frostbite and shortage of oxygen during the flight. Forensic experts said that he had died five days before the body was found,” a police officer said.

The police have not been able to identify the man yet. He was found wearing a shirt and a pair of jeans and had no documents in his pockets. Officers say that the man simply intended to travel for free.

“We are perplexed about the incident. How could a man climb into the wheel-well?” a spokesperson for the airline said.

The A-320 plane, in which the dead body was found, has made a number of stops at the airports of Niigata, Beijing, Seoul, Khabarovsk, Irkutsk and Vladivostok during those five days. However, the free-rider has not been found in any of the above-mentioned airports. The crew of the plane reported no malfunctions either.

There were incidents when passengers attempted to climb into technical unit of jetliners to fly from one location to another. All of such free-riders died, except for Andrey Scherbakov from the Russian city of Perm, who committed his ‘deed’ at age 15.

The young man crawled onto the runway of the Perm Airport through a hole in the fence, climbed into the wheel-well of one of the planes and fell asleep. The guy woke up in Moscow. He was chilled to the bone, but he was lucky to stay alive.

The incident received an extensive coverage in the Russian media. All experts were saying that it was impossible for a human being to fly 1,300 kilometers at high altitudes. Many of them said that the young man had most likely made the whole story up.

However, it was later revealed that the man was not lying. There was no criminal case filed against the young man, but Andrey suffered from frostbite seriously and had four of his fingers amputated.