US Millionaire Mogilyansky To Be Sentenced for Organizing Child Prostitution Ring 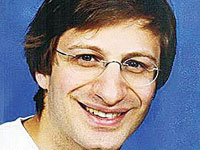 US Millionaire Mogilyansky To Be Sentenced for Organizing Child Prostitution Ring

Mogilyansky holds the dual Russian-American citizenship. He is a prosperous businessman. His personal wealth has been estimated at $5 million. He has a wife and two children.

For a long time Mogilyansky had been known not only as a respectable businessman and philanthropist but as the chairman and founder of the International Foundation for Terror Act Victims. But in December 2008 the FBI arrested Mogilyansky on sex tourism charges.

Mogilyansky’s criminal activity was detected incidentally. A wealthy American, having paid great money for sex with a young virgin in Moscow, caught a venereal disease from her.

As early as 2004 the Russian investigating committee detected a prostitution ring, which provided young boys and girls to pedophiles. Two of the three organizers of that ring, Andrei Tarasov and Pavel Mikhalev were arrested and convicted afterwards.

At that moment investigation officers failed to find the third organizer, but it was later revealed that Mogilyansky was the third member of the criminal gang. A coincidence helped to find him.

When Russian investigators were very close to detecting Mogilyansky, Tarasov decided to blackmail him and sent him several discreditable photos. At that moment the FBI was tracking Mogilyansky’s correspondence. Those photos were enough for initiation of a criminal case.

Afterwards the Russian and American investigators interrogated Tarasov and the witnesses to that case together. Bellow are the extracts from the record of interrogation.

“I have been long working for the Centre for Children Creative Work. Then the salary went down, and I decided to start prostitution trading. At first, we would pick girls from prostitutes in the Moscow region, then we switched to children. I hired five apartments in the Northwest of the capital, launch a site. I got acquainted with Mogilyanksy in August, 2002 at a Patio-Pizza restaurant. He was sitting at the table and looking at girls’ photographs on my site. I offered him to become friends, and then admitted that I was the owner of the website. He bought a girl for 100 dollars, and recommended me his acquaintance, a Muscovite Natalia G., to administrate the site. Mogilyanksy took an active part in the development of the child prostitution ring in Moscow. He gave me the 10,000-dollar credit and bought a Ford Mondeo to bring children from St.-Petersburg. He visited Russia almost every month, and I was his driver. When we met I paid him $2,000 – 3,000 as to the partner. We always argued because of the girls. Mogilyanksy loved only girls under 15. We recruited such girls from a local orphanage. Street prostitutes did it for us. Among them there were Mogilyansky’s friends. He had an inclination to violence. He liked to play rapist-and-victim game with girls. Mogilyanksy wanted to sleep with virgins because he could hurt them, and he liked it…”

“He knocked on the door and told me that I should not stay for too long in the bathroom before this. Mogilyanksy met me sitting on the bed with a towel around his hips. I asked how old he was. He answered that he was 33. I asked him not to do anything to me, as I was too small. He gave me several pain-killing pills. He began removing my pajamas, I started crying. Then he called his familiar prostitute and she laid down nearby, persuading, holding my hand. He laid on top of me, but I have pushed him off with my legs and escaped to the kitchen. Then he called another girl. He spent six minutes with her in the room. They did it not to make me be scared. But I disagreed all the same. Then I was taken to another apartment where a naked woman took many pictures of me. There was also an infant and a St. Bernard dog in that apartment. Then I was taken to another apartment. There they showed me, where the condoms were, and locked me in the room. An unknown person in black glasses opened the door. He raped me and left. Every day new men were coming. One day Mogilyanksy and Tarasov came. I was afraid and hated Mogiljansky, I run out to the balcony, but Tarasov began calming me down. He explained that he was the most important client who had arrived to Moscow only because of me. Mogilyanksy was very rude.”

The worst thing was that children were forced to feel pain more than one time. A gynecologist working for the prostitute ring would often retrieve the girls’ innocence, and they could be sold to clients as virgins again. The American tourist who helped the police detect Mogilyanksy presumably had sex with one of those girls.

Mogilyanksy was sure he would never be put on trial. He thought the American public justice would never believe the evidence received from Russia. Fortunately, good cooperation between American and Russian investigators became fruitful, and Mogilyanksy will face a high sentence for his criminal activities.