Russia’s Surgeon General Gennady Onischenko offered to ban the trips of Russian schoolchildren to Great Britain over the fear of catching the swine flu infection. 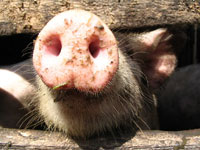 “The incidents, when groups of schoolchildren bring suspicious infections to the Russian Federation, have become more frequent recently. Many of those children return to Russia from Britain – the country, which they visit to master their knowledge of English. Therefore, there is every reason to immediately ban any further trips of Russian children to England,” Onischenko said in a statement.

Three teenagers from the Russian city of Yekaterinburg returned to Russia from Britain on July 21. All of them were hospitalized with symptoms of AH1N1 virus. The results of their analyses have not been exposed yet. Fifteen other people having similar symptoms have been hospitalized in the city since then.

The situation in Moscow is more serious. About 100 people are suspected of having the dangerous virus. Nearly 90 people, who contacted infected individuals, have been hospitalized at Moscow’s Infectious Hospital. For the time being, all of them remain in satisfactory condition. A/H1N1 virus has been confirmed with nine of them.

Direct transmission of a swine flu virus from pigs to humans is occasionally possible (called zoonotic swine flu). In all, 50 cases are known to have occurred since the first report in medical literature in 1958, which have resulted in a total of six deaths. Of these six people, one was pregnant, one had leukemia, one had Hodgkin disease and two were known to be previously healthy. Despite these apparently low numbers of infections, the true rate of infection may be higher, since most cases only cause a very mild disease, and will probably never be reported or diagnosed.

Symptoms include fever, cough, sore throat, body aches, headache, chills and fatigue. The 2009 outbreak has shown an increased percentage of patients reporting diarrhea and vomiting. The 2009 H1N1 virus is not zoonotic swine flu, as it is not transmitted from pigs to humans, but from person to person.

The most common cause of death is respiratory failure, other causes of death are pneumonia (leading to sepsis), high fever (leading to neurological problems), dehydration (from excessive vomiting and diarrhea) and electrolyte imbalance. Fatalities are more likely in young children and the elderly.