Yevgeny Ginter, a 21-year-old resident of the town of Varna, in Russia’s Ural region, flagged down a car one day when he was going home from work. He did not return home that night. His beheaded body was found 1.5 months later. 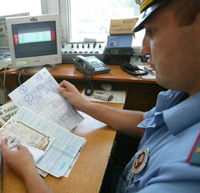 The bus, in which the young man was returning home that day, broke on the way to Varna. Yevgeny had to flag down a car to get home. The driver picked up another hiker later – a police officer. As soon as the policeman got in the car, Yevgeny realized that the officer was drunk.

The officer, Artyom Zolotukhin, told the driver to take him home first. Yevgeny did not mind. The officer suddenly asked the young man to show him how much money he had. The young man turned out his pockets to show that he only had 30 rubles with him ($1).

“I’ll give you the rest when I get home,” Yevgeny replied.

The driver stopped the car and asked the man out. However, the police officer said that he would pay for Yevgeny instead. When the cab arrived to the place where the officer was going, the policeman kept his promise. He paid for the young man and told Yevgeny to follow him. Yevgeny stepped out of the car.

The officer told Yevgeny that he would have to pay him back tenfold. The policeman started beating the young man, while Yevgeny was trying to explain that he would pay him back everything, that he had the money at home. Yevgeny finally fought back, but the police officer knocked him down on the ground, pulled a jackknife from his pocket and started cutting Yevgeny’s head off.

“They still haven’t found his head. We can’t bury our son because of that,” Yevgeny’s mother said.

Artyom Zolotukhin, the police officer, was arrested after the cab driver had testified to the police. The officer said that had wrapped the young man’s body into cement bags and hid it on the lake in the bushes. A week later, the criminal took the body to a landfill. He said that he had lost the head somewhere between his town and the place of Yevgeny’s residence.

Artyom Zolotukhin may face 15 years in prison for slaughtering the young man because of 60 rubles.