A group of teenagers was playing Counter Strike at night of May 19 in a small town of Russia’s Novosibirsk region. A 14-year-old boy Sasha was playing the game with his friend and he already passed several difficult levels. The joy of the two young gamers was spoiled by Alexei, a student of a local technical school. Being a great fan of the game, Alexei sat at the adjacent table and started beating Sasha’s character. Finally, Sasha lost his temper and began arguing with the student. They almost started fighting, but the administrator of the club came in time to part them. 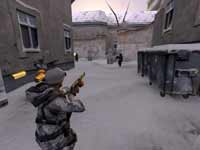 At about 3 a.m. Sasha and his friend left the club. But they did not go home immediately and decided to settle things with their offender ‘in an adult-like way’.

Sasha attacked his Counter Strike rival, knocked him down, literally trampled his head in the mud at the depth of 30 centimeters and hit it with a brick.

His friend Ilya was standing near watching the bloody massacre. Next morning a woman from a neighbouring house was walking with her dog and came across Alexei’s dead body. The attacker, Sasha, was detected soon afterwards. He already pleaded guilty and is now under arrest.

Investigators cannot understand how a weak 14-year-old boy could beat a 17-year-old guy dead. Officers believe that Sasha was not the only attacker.

School Number 102 where the murderer studied closed for one day of mourning.. Teachers and pupils still cannot believe that the sickly and unsporting boy could kill a healthy young man alone, especially for the sake of a computer game.

Sasha, or Alexander, comes from a single-parent family. The boy always studied poorly and became impertinent to his teachers.

The murdered student was said to be a kind and non-belligerent person. Despite his young age he lived on his own and worked in a kindergarten with his father. However, he did not save money, but spent everything on computer games in the local computer club. He could take a computer for five-seven hours and spent a whole night playing games.

Counter Strike is banned in several countries. For instance, In Brazil the game is believed to pose a great hazard to health and provoke violence.

The federal Brazilian judge Carlos Alberto Simoes de Tomaz, of the Minas Gerais judiciary section, ordered the ban in October 2007 because, according to him, the games "bring immanent stimulus to the subversion of the social order, attempting against the democratic and rightful state and against the public safety".

The game faced controversy in April 2007 when lawyer Jack Thompson predicted that the perpetrator of the Virginia Tech Massacre had been trained to kill in the game, well before Seung-Hui Cho (the shooter) was identified. Thompson claimed the game "Drills you and gives you scenarios on how to kill them [and] gets you to kill them with your heart rate lower." Riley Donelan rebutted by saying "How can a game teach you how to lower your heart rate in real life, these claims are ridiculous. It is important to note that Seung-Hui Cho is only supposed to have played it in high school, this information has not been confirmed as it was told by only a few acquaintances from school. Thompson's answer to this was "You don't drop it when you go to college, typically." Also the game does not include tutorials or training missions.

Also Jack Thompson has not been able to put forth any solid evidence about his claims. Jack Thompson also blamed Counter-Strike for February 14, 2008 for the Northern Illinois University shooting perpetrated by Steven Kazmierczak. Thompson claimed in an interview that "You can rehearse these type of massacres on simulators which are called video games and you can...therefore made more proficient in doing this." He explains that "Counter-Strike Half-Life" was the game Seung-Hui Cho, the perpetrator of he Virginia Tech Massacre trained on in High School, suggesting that the behavior of the NIU shooter had the same sort of training. Thompson went on to say that "In real life, Kazmierczak - who had become "erratic" recently after shunning medication for an undisclosed illness - purchased weapons like those used in Counter-Strike, including a Glock handgun and a pump-action Remington shotgun, which he bought legally on Feb. 9."

Such cases of computer game violence are not rare in Russia . In St. Petersburg a young man, 26, killed his father. He said that he had committed patricide because of the game Diablo that he constantly played. In Moscow a Lineage II-gamer, 25, beat his rival dead and received a prison sentence.