The Russian Orthodox Church expressed its concerns in connection with the modern tradition to celebrate Halloween. “Times have changed a lot nowadays. The innocent amusement has been replaced with the entertainment industry, which tends to take dark and mystical coloring,” an article by Mikhail Dudko, a priest of the Uspensky Cathedral in London said. 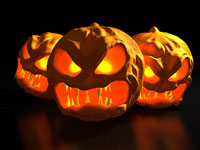 Speaking about the modern tradition to celebrate Halloween, the cleric said that normal piety has been replaced with commercial dismay. “Our ancestors would think that Europe disavowed Jesus Christ and started worshipping Satan,” the priest wrote.

“Old Christian nations of the continent used to entertain themselves with the contrast of their children’s innocent faces and pumpkins which only symbolized the evil defeated by Christ. Nowadays the true evil gradually comes to a reign,” Mikhail Dudko wrote.

To exemplify his point of view, the priest resorts to the film titled Halloween. The film tells of a little boy, who murdered his six-year-old sister on the eve of Halloween and then became a blood-thirsty killer.

“Confessions of mad people have become quite ordinary. They acknowledge that the roots of their pathological aggressiveness lie in their passion for pop culture, computer games and cinema. Who knows how many mentally unstable people this film will push to committing a crime,” the priest wrote in his article.

Mikhail Dudko also said that in Great Britain, where Halloween originally appeared, many people who have not lost their reason, begin to express their deep anxiety because of Halloween. Local clergymen, for example, asked trading networks to make Halloween a kinder holiday. “One has to be aware of the liberalism of the Anglican Church to understand the reason for such an address – the evil has gone too far,” the priest wrote.

In the meantime, spokespeople for the Depart of Education in Moscow say that Russian schools must not organize any events devoted to Halloween. “The position of the department remains unchanged since 2003, when the administration signed a letter to headmasters of Moscow schools asking them not to hold any events devoted to Halloween,” the press secretary of the Department of Education, Alexander Gavrilov said.

The official said that such decision was made in connection with religious aspects of the holiday – the cult of death, gloating over death, the personification of evil spirits, etc. which contradicts to the secular character of education of state-run schools in Russia. “It is destructive for the psychological and moral health of schoolchildren,” Gavrilov said.

The term Halloween (and its alternative rendering Hallowe'en) is shortened from All-hallow-even, as it is the eve of "All Hallows' Day", which is now also known as All Saints' Day. Some modern Halloween traditions developed out of older pagan traditions, especially surrounding the Irish holiday Samhain, a day associated both with the harvest and otherworldly spirits. Irish and Scottish immigrants carried versions of the tradition to North America in the nineteenth century. Other western countries embraced the holiday in the late twentieth century. Halloween is now celebrated in several parts of the Western world, most commonly in Ireland, the United States, Canada, Puerto Rico, and the United Kingdom and occasionally in parts of Australia and New Zealand.

Many European cultural traditions, in particular Celtic cultures, hold that Halloween is one of the liminal times of the year when spirits can make contact with the physical world, and when magic is most potent, according to Wikipedia.

Halloween did not become a holiday in the United States until the 19th century, where lingering Puritan tradition restricted the observance of many holidays. American almanacs of the late 18th and early 19th centuries do not include Halloween in their lists of holidays. The transatlantic migration of nearly two million Irish following the Irish Potato Famine (1845-1849) finally brought the holiday to the United States. Scottish emigration from the British Isles, primarily to Canada before 1870 and to the United States thereafter, brought the Scottish version of the holiday to each country.