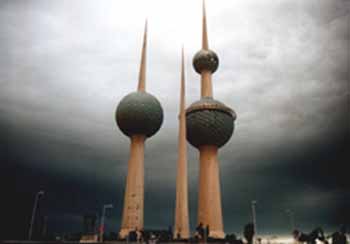 Saddam Hussein, the dictator who craved for power, acted just like Hitler before his death. When his plans of invading Kuwait were frustrated, Saddam took revenge on the world arranging inconceivable ecological catastrophe.

Saddam Hussein intended the invasion of Kuwait in order to demonstrate his power and to gain the respect of the Muslim world that would recognize him as their leader. This venture ended up in pitiful defeat with thousands of compatriots killed. American bombardments destroyed the country turning its plants and factories into ruins. Iraqi population suffered numerous problems because of the economic warfare that followed after the military destruction.

The occupation of small neighbor Kuwait by Iraqi troops lasted less then six months. Then air and land warfare followed. It did not give any extra glory to Saddam Hussein, nor did it help in creating the positive image of the strong Muslim leader who wishes for peace and prosperity of his country.

Kuwait's and Iraqi horizon did not see the sun for about a year. It was sinking in the black smoke of 600 oil wells that were on fire.

Scientists thought it would take at least two years before firemen from different countries could extinguish a fire and stop oil eruption. By that time the damage suffered by the planet could have become irreversible. Fortunately it became possible to overcome the catastrophe earlier.

People all over the world in prime time could watch TV programs showing the hell on earth where the fires were hiding the midday sun and the kids were coughing because their lungs were poisoned with contaminated air.

Fiery balls are roaring as mythical dragons, black soot is covering the sand and repainting it with funeral colors. Black sticky rains mix with the waters of Persian Gulf that once used to be crystal-clear. Smoke clouds reduce the temperature in the desert by 20 degrees at noon. Besides, it stops the traffic in many areas of Kuwait in the rushest of the rush hours, depending on the wind's direction.

Once Hussein's army attacked Kuwait in August 1990 field engineer forces had to face the main task: they had to invade and mine oil-derricks in Kuwait. The explosives placed into oil wells demonstrated the gravity of the dictator's plan to achieve his goals by threatening the world with global ecological catastrophe.

Some oil wells were blown up with the bombs dropped by Iraqi troops. Others were blown up by Iraqi field engineers, when the advanced armored subdivisions of the coalition do away with Saddam Hussein's defense in a blink.

Kuwait was liberated under the black sky and in contaminated air that was dangerous for human health.

Fires at the oil wells were intensified by high pressure created by the underground oil tank. The oil was pushed onto the surface with great force.

About 500000 tones of polluting chemicals were thrown into atmosphere every day. This is ten times more than the pollutants thrown by all the American industrial and energy enterprises altogether at that time. Oil smoke contained poisonous substances including sulfur dioxide, carbon monoxide and hydrocarbon.

Scientists feared that this smoke would lead to the most horrible ecological catastrophe, that is atomic winter. This smoke when rising up to the atmosphere can block the way of the air and sunrays. In this case the earth will turn into permafrost area.

As far as the earth surface is concerned burning oil wells threatened fragile desert ecosystem. Although some consider desert lifeless it is not so. Desert is a home for numerous insects,scorpions,snakesandsuch animals as camels and gazelles. Microorganisms form the surface layer of the desert almost like corals do in the depths of the sea. This layer captures seeds of shrubs, which prevents the blowing of the sand.

The war resulted in more than 300 square miles of the desert covered in oil. In some places the thickness of the oil layer was only about several inches, in other places large lakes six or more feet deep were formed. There were filled with oil fountains that were not set on fire when retreating Iraqi troops were blowing up the oil wells.

Only years after the economic and ecological damage caused by these oil lakes was estimated. It is clear that they will bring many troubles to fragile desert infrastructure in the nearest future. Places where desert surface was not covered with oil turned into glass fields that were formed as a result of high temperature influence over the sand.

People became the first victims of the smoke. Urgent medical care was needed not only in Kuwait but in Bahrain as well.

However, the biggest preoccupation is the fate of the future generation. According to doctors, high density of the cancer pathogens that are contained in the smoke lead to the birth of deformed children.

This large problem was fortunately solved relatively quickly. Firemen from the US, England, Belgium were involved in extinguishing fires. Later on they were joined by colleagues from other countries. Courageous people tried their best to stop the fire using equipment, brute force and crafty tricks.

They made their way through the fire covering themselves with water streams and heat-resistant shields. In order to extinguish the fire special explosive assemblies were used. Then valve mechanism was installed on the scorching pipe. This mechanism was called Christmas tree. A single mistake could lead to the fatal consequences.

A fireman from Texas Red Edair who bravely leaded people into the very center of the fire during the oilrig catastrophe in the Northern Sea was amazed by what he saw in Kuwait. He said: “Any of the oil wells itself is a catastrophe. However, there are hundreds of these wells in front of us and we have to cope with them. We have to plan every step, looking for new ways of fighting the fire. The job is awfully hard and we are doing it seven days a week”.

It took about two years to extinguish the fire completely. The world sighed with relief: the threat of atomic winter was prevented.

Ecological catastrophe that demonstrated the readiness of the Iraqi dictator to employ any terrorist device in order to achieve his goals was caused by Saddam Hussein in the Persian Gulf as well. Thousands of tones of unrefined oil that were thrown into its waters. As a result, the gulf that served as a home for numerous kinds of fish and birds was turned into giant cemetery. Oil destroyed shrimp colonies and feeding places of sea habitants. This damage is impossible to estimate.

Months after the end of the war oil patch still remained in its place. Fish disappeared, more than 20000 seagulls died.

It is hard to accept but their bodies that were black from oil aroused more sympathy of the TV audience than the bodies of dead Iraqis.

Millions of liters of oil were cleared from the waters quickly. Yet millions more were stranded and formed tar crust under the scorching sun.

Persian Gulf is used by 45 kinds of migrant birds as a feeding base in spring. Many of them died in stinking poisonous waters.

Climatologist Hasan Nasrallah warns that the final consequences of the disaster in Kuwait are impossible to determine in the near future. He writes: “We are speaking about the massive emission that had never been observed before. Thу world had never witnessed a fire similar to that in Kuwait. The man created this evil and it is the man who will have to reap the fruits of his labor and eliminate the damage”.