First cellular phones were used in cars: those were cumbersome devices weighing 30-40 kilos

In Russia, just four years ago mobile phones began to turn from bulky monsters into nice little devices. Today, having a cell phone does not indicate that its owner has high incomes; what is more, mobile operators regularly cut their tariffs which makes mobile phones available for everyone. How did mobile phones appear at all? 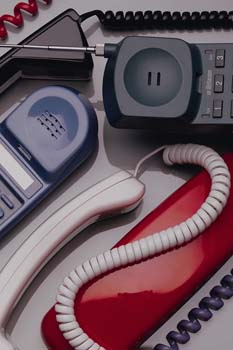 Martin Cooper is considered the official “father” of a cell phone; being rather old today he is still a significant figure in the cell communications business.

In 1947, the Bell Laboratories research laboratory offered creation of a mobile phone to be used in cars. Those were devices weighing 30-40 kg; by the 1970s mobile phones considerably lost some of their weight to 15 kg and became smaller. There was no internal power source in such phones that is why automobile electricity was used for devices to function.

In 1954, Martin Cooper began his career as an engineer with Motorola, then universally known radio equipment producer. In several years, Cooper became the head of the department working on portable devices and created the first portable radio transmitter in 1967. Since that time he began working on a phone which people could take anywhere. Motorola decided to demonstrate that creation of cell networks was possible. April 3, 1973 engineers of the company mounted a base station on the top of a 50-storeyd building in New York. That was just a prototype able to serve some 30 clients and connect them to ground-based communications lines. Approximately at the same time the first mobile phone Dyna-Tac appeared. Today, the size of the first mobile phone seems to be shocking for us: 225х125х375mm, 1.15kg! There was no display at all and certainly no phone book which are traditional for modern cell phones. The phone battery maintained up to 30 minutes of the conversation regime and it took 10 hours to charge the battery. And still that was a revolution in the communications sphere.

Motorola did not open series production of Dyna-Tac; the company had developed five more generations of mobile phones before they became available for public in 1983.

However, it is not quite easy to say how old the mobile phone is. The first commercial cell network was put in operation ten years after the experiment conducted in New York.

March 6, 1983 Motorola began selling its DynaTAC 8000X in the US. The phone weighed 800 g but it was very long, 33 centimeter, to be put into a pocket. Even though the phone was very expensive - $3,995 – clients had to put themselves down on a waiting list. Having a mobile phone added much prestige to its owners, and the number of cell networks clients increased to 300,000 people in a year.

Nowadays, over 1.2 billion people hold mobile phones which are no longer exotic but everyday things. Engineers have worked a lot to make mobile phones so small that it is sometimes problematic to find a phone amidst keys and key holders in a pocket.

Appearance of mobile phones slowed down satellite phone development as satellite communications proved to be more expensive and less comfortable than cell communications. Cell communication is still incredibly popular despite of alarming reports saying that radiation emitted by cell phones may provoke cancer.