The Moscow government has officially rejected the organization of gay pride parade in Russia's capital, RIA Novosti reports with reference to security agencies of the city authorities. The organizers of the gay pride parade officially informed the Moscow administration of their intention to hold the event in the city at the end of May, officials said. 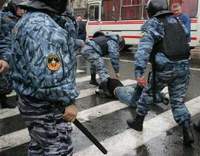 “The meeting between city administration officials and the organizers of the gay pride parade took place on Tuesday. The latter received an official refusal for this event,” an official from the Moscow authorities said. “It was particularly said that such an event as a gay pride parade would violate rights and interests of other citizens, which contradicts to applicable laws,” the official added.

The gay pride parade was supposed to be held in Moscow on May 27. One of its organizers, Nikolai Alekseyev, said that Russian homosexuals intended to hold a three-day gay festival in Moscow this year, which would then be finished with a parade to promote tolerance towards homosexual individuals in Russia and advocate their human rights.

Moscow Mayor Yuri Luzhkov banned the parade last year too. Its organizers filed an appeal at a Moscow court, but the court upheld the mayor’s decision. Nevertheless, homosexuals gathered in the Moscow center on May 27 2006 anyway. The unauthorized parade ended with clashes, more than 50 of its members were arrested.