Russians still eternally proud of their Soviet past, but lack values in their present

Recent opinion polls show that the Soviet-era achievements still make up the list of things present-day Russians are proud of. In light of the upcoming elections, the poll results send a clear signal to the powers that be, which had better take action and make a fundamental change in the current policies. 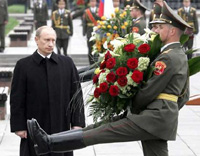 Russians still eternally proud of their Soviet past, but lack values in their present

It was widely expected that the Soviet heroes and heroines of WWII would top the so-called “pride parade list” of the respondents. The first manned space flight by Yuri Gagarin is a runner-up. The remaining achievements are positioned as follows (in a declining fashion): the launch of the sputnik; the daring flights of the famous Soviet aviator Valery Chkalov; the building of an A-bomb; the construction of a hydroelectric power station on the Dnieper; the rescue of the members of an arctic expedition on board the Chelyuskin, which was icebound in the Chukchi Sea in 1934.

All the above heroic deeds and achievements put by the Russians on the list are, without doubt, worthy of the highest praise and respect. However, there is a serious flaw in the arithmetic of the “Soviet patriotism.” It does not touch upon the basics of the human existence e.g. the meaning of a human life, family values, happiness etc.

In the past, we got used to taking pride in the heroic deeds. The authorities instilled a sense of pride in us for those actions, if you will. No doubt about it, the feats greatly contributed to the glorification of the USSR and the Communist Party of the Soviet Union, the self-proclaimed “vanguard of the workers.” The question is: Did those heroics make the Soviet people happier in any way? Did the life of the rank and file become better with all those noteworthy achievements reported far and wide by the state-controlled media?

The people grew feebler in the process

The population of the Soviet Union paid a heavy price for keeping up with the “giant steps” of the changes lauded by Soviet poets in the 1920s and 1930s. The loss of human life accompanying the changes was often completely out of line with the circumstances. The rural areas were laid waste by Josef Stalin who wanted to carry out industrialization at an accelerated pace. As a result, the peasants were turned into the proletariat and provided with miserable housing in communal apartments, barracks and basements. The Soviet science (along with the other sectors of the Soviet economy) was militarized in order to build an atomic bomb. The best Soviet scientists were working in prison-like institutions under the supervision of the KGB. The Soviet propaganda machine took maximum advantage of the rescue of the Chelyuskin expedition, the breathtaking nonstop flight from Moscow to Vancouver by Chkalov’s crew, and the first manned space flight by Yuri Gagarin.

In the meantime, the life of the people was pretty bleak. The people would hope to see another government degree reducing the price of flour by several kopeks; they would stand for hours in the long lines outside the grocery stores selling mediocre meat, buckwheat seeds and vegetable oil. The composers would write countless songs about the great achievements, Lenin’s genius, and the farsightedness of the CPSU while the “state was swelling up as the people grew feebler,” to quote the words of the famous Russian historian Vasily Klyuchevsky.

The fruits of the grandeur

We are still reaping fruits of the “state grandeur” built at the expense of the well-being of the nation. Some facts and figures concerning Russia can still defy imagination. Russia, or the Soviet Union for that matter, was the first country to put man into space in 1961. Still, about 20% of all schools in Russia are heated by firewood. It will be easier to travel from Moscow to Paris by air than take a ride by car from a typical Russian village to thenearest town because the densityof Russia’s road network is 4 times lower than that in the United States. These days we keep counting billions of dollars from the oil sales accumulated in the Stabilization Fund while the nation’s sick and needy have no money to buy medicine.

Those in need of in-patient treatment are offered “sit-down space” in some of the Moscow hospitals which have a severe shortage of berths. It is a crying shame that the above happen in Moscow whose casinos, boutiques, and restaurants became the object of general astonishment for foreign visitors. There is some truth in the sarcastic comments by Gennady Onishchenko, Russia’s chief sanitary official, who recently said that a cemetery was the main efficiency criterion of the authorities. The USSR and U.S. had parity in populations before WWII. Nowadays America’s population exceeds 300 million whereas the total number of people living in this country is twice as small. Bearing in mind the current dynamics of population decrease, we should not be greatly surprised to learn of “standing space” offers for a burial ground one of these days.

“We should be making nails out of these people,” as a well-known Soviet poet once put it. Could it be that the Russians belong to some “iron” nation, a nation of special purpose? We parted with Communism 15 years ago. However, we still have an itch to play scary monster and send shivers round the globe once in a while. On the other hand, we have neither will nor experience to make the authorities treat the people in a decent way. The authorities carry out highly unpopular social reforms aimed at relinquishing non-cash benefits for pensioners and low-income families.

Housing and medicine prices skyrocket all over the country as the government officials shamelessly fool the public with yet another report on a “steady increase in the average pay on a nation-wide level.” We seem to have an incurable case of gullibility. Besides, we keep voting for “the party of capitalists and bureaucrats” every four years. We forgot how to stand up for our rights. For some reasons, Russia’s workers can go out on strike only if they work at a Ford plant. Meanwhile, the media keep telling us that trade unions do exist in this country. Where on earth are those unions hiding in?

Various political parties begin to mushroom as elections draw near. All of them are ostensibly set up for the “benefit of the people.” Yet the real power rests with the bureaucrats who believe they know better what the people deserve.

The State Duma recently voted for a new basket of goods and services. The former basket had been in effect since Yeltsin’s time. The Duma deputies increased the value of the basket by 84 rubles – a piddling amount any way you look at it. The deputies reportedly shifted emphasis to a high-calorie diet. Has any of the deputies ever tried to “cook a soup” using the ingredients approved for a high-calorie diet? Researchers at the Institute of Population Studies of the Russian Academy of Sciences gave it a try. The results of their research look appalling: the volunteers began to develop signs of overall deterioration in their state of health after staying on that “high-calorie diet” for 2-3 months. No wonder many of the Russian army conscripts are undernourished while the number of school children with a variety of health problems is about to total 70-80%. In the meantime, we are being told that life has become better.

After all, what is the difference between our powers that be and the Iranian leaders? The Iranian leaders are doing their best trying to convince their people to make many sacrifices for the sake of an ultimate goal i.e. building an A-bomb. They even make the young Iranians sing songs about a nuclear reactor.

Share your thoughts with the world. Join Pravda.ru forum