The other day, nine people belonging to the religious sect Powerful God’s Mother Orthodox Church, also known as The Blessed Virgin’s Center, were detained in the Russian city of Lipetsk. The sect members used their exhibition called ‘The Solovki Island is Another Golgotha’ as a cover to win teenagers over to their side. It seems that the incident has made the authorities think about saving people from the influence of religious sects. 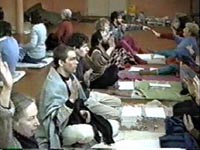 Instead of the exhibition, The Blessed Virgin’s Center told teenagers about the teaching of some “blessed Johann” who had allegedly seen God’s Mother who ordered him to set up “a new true church”. The narration was told to the accompaniment of obsessive music and together with spreading intoxicating substances. As a result of such lectures, a schoolgirl felt unwell and her teacher had to send for an ambulance. Over ten pupils had to consult doctors because of high temperature and indisposition after the lectures; many of them could cope with stress just in several days.

A special operation was conducted to detain nine members of the religious sect. The precedent has considerably stirred up the authorities who think it is high time to take measures to toughen control over non-traditional religious organizations. Indeed, the Russian law pertaining to sects and implementation of the law is far from being perfect in this country.

The numerous organizations that declare themselves being churches, centers and other religious formations are widely spread in Russia, and their actual principles absolutely disagree with the clear regulations fixed in their charters. And there is little control over the activity of such organizations. Unfortunately, the authorities pay their attention to religious sects only when these organizations get involved in serious scandals.

A huge number of religious organizations sprang up in Russia over the 1990s and the majority of them are sects. Jehovah’s Witnesses, scientologists and munites are the biggest and the most known among them. Many sects use pseudo-Christian or pseudo-Hinduism names as a cover; some of them are an incredible mixture of Christian, Judaism or Muslim creeds. There are from 200 to 300 religious sects in Russia.

There are two basic types of sects. The first one consists of sects serving purely religious purposes. Their leaders are mentally diseased people who pathologically seek other people’s notice and worshipping. They suffer from both complexes of inferiority and super-adequateness. On the one hand, such people imagine they are superior to others; they call themselves prophets and even gods. On the other hand, they badly need others to recognize their superiority. And this is why a sect leader is usually treated as something superior, inaccessible and great.

The other type of sects is more widely spread and serves material ends only. A man entangled with such a sect has no longer control over himself. He begins to bring his wages, family jewelry and savings to his “spiritual leaders”. Then, sect leaders may persuade weak-willed sect members sell their cars and apartments to bring money for further use in the sect. When it is clear that sect members have exhausted their material resources, leaders of such organizations begin to use these people as a free manpower for their own purposes.

It usually happens that the first type of sects inevitably develops into the second type of sects under the influence of people who wish to make money with people’s religious mistakes.

Why are sects so much attractive for many people?

Archpriest Alexander Avdyugin says that people seek membership in such sects as they are promised quick implementation of their desires. People want to get money, health, employment and so on very quickly and for free. And this is the basic principle that sect recruiters actively use for crimping new members. He adds that people should mind that Orthodoxy supposes much work including debt repaying to other people, taking care of sick parents and praying. Sect members have no debts to repay as the entire of their finance is concentrated inside of the sect; these people easily change their parents for sect leaders; and sects usually interpret prayers as entertainment merely.

Sect members are perfect psychologists. On the Internet, there is a huge number of booklets meant for the Jehovah’s Witnesses instructing them how to win any man over to the sect’s side irrespective of his religious creed. The booklets tell how and what recruiters should say, how to smile and respond to zombie people’s consciousness and make them new sect members.

Everyone must take immediate measures when it turns out that his relatives or acquaintances have been involved into a sect and are getting more and more dependent upon it. It is important to answer the question why our close person has become a sectarian and what he is seeking there. Probably, this man finds no support among his family and needs someone who would understand and support him. And may be he needs a leader to show him the way to follow in the life. And sects promise a solution to any problem that people may have. In the search of truth man can go too far and even break some religious and moral principles. We must realize that we are responsible for the terrible fact of other people’s involving into sects. Remember that the best way to abandon a sect is never to be involved into it.

Speak your mind on Pravda.ru Forum. Join for free!