Russian officials banned the showing of controversial comedy film “Borat” in cinemas across the country. The film, which supposedly takes a deep look into US culture to the benefit of Kazakhstan, a republic of the former Soviet Union, is a satirical piece of work describing customs and traditions of the Asian country. In Russia, the film will be released only on DVD. 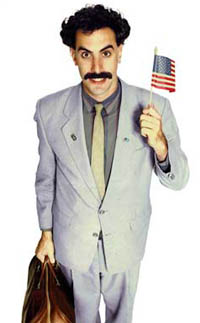 The Russian premier of the film was originally slated on November 30. The comedy shot by director Larry Charles titled “Borat: Cultural Learnings of America Make Benefit Glorious Nation of Kazakhstan” was released by Twentieth Century Fox at the end of October. The company did not even think that the motion picture about a man from Kazakhstan could be any success in the USA. Only 800 copies of the movie were made instead of the originally planned 2,000. However, the movie became hugely popular and topped cinema charts. The film was launched in less than 1,000 cinemas across the USA, but it has already managed to gross $26.37 million. The previous record of the kind was set by Michael Moore’s Fahrenheit 9/11: $23.9 million in only 868 cinemas.

Borat has been released in Great Britain, where it also promises to set another box office record. Universal Pictures has already acquired rights for the next film with the participation of the British comedian Sacha Baron Cohen, who created the unforgettable image of Kazakh journalist Borat Sagdiyev.

In “Borat” the journalist travels across the USA to California to marry sex star Pamela Anderson. Sacha Baron Cohen is apparently a big fan of the world-famous star of Playboy magazine. He rudely interrupted the wedding ceremony of Pamela’s dogs on Malibu beach. The comedian, who is also known for his image of Ali G, appeared from the ocean astride an inflatable turtle.

Borat tells viewers many “curious details” about the life of present-day Kazakhstan. The comedy portrays it as a country whose people drink horse urine and whose national pastimes include rape, incest and shooting dogs.

Russian officials expressed their concerns in connection with the scandalous motion picture of the British comedian. “We decided not to grant this film a cinema license because there are moments in the film which could offend some viewers' religious or national sensibilities,'' Yuri Vasyuchkov, head of the film licensing department at Russia's Moscow-based Federal Culture and Cinematography Agency said, Bloomberg reports. The official added that certain scenes of the film could be perceived as insulting and humiliating by a certain group of cinema-goers. The official refused to specify which nationalities he particularly implied.

It is worthy of note that Jewish, Gypsy and Muslims organizations have attacked Cohen’s works before. The comedian was also criticized in the USA and in Europe.

Borat Sagdiyev represents “his own country” Kazakhstan as a society of woman-haters, racists and anti-Semites. Kazakh President Nursultan Nazarbayev was deeply concerned over the racist image of his country portrayed in Borat’s new movie.