In July 1931, the Central Executive Committee of the Communist Party of the Soviet Union made a decision to demolish the Cathedral of Christ the Savior in Moscow. 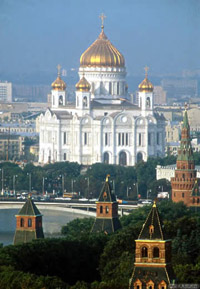 The whole Russia shared in the construction of the cathedral – it was financed from the state coffers while part of the money was raised by public subscription. The cathedral was meant to be erected as a monument to mark Russia’s victory in the Great Patriotic War against Napoleonic France in 1812. The manifesto issued by the Russian Emperor Alexander I read: “May this cathedral stand for many centuries. May the censer of gratitude smoke beside the holy altar of our Savior so that the next generations will hold in deepest respect the deeds of their forebears.”

But the future had a different plot in store. In less than fifty years the cathedral was demolished by the Bolsheviks.

The builders laid the foundations of the cathedral on October 12, 1817, five years after the French army fled Moscow. Scores of people from all over the city came to witness the ceremony.

Many an architect submitted their designs for consideration. But the tough competition was eventually won by the member of the Russian Academy of Fine Arts Carl Wietberg. The location chosen for the cathedral seemed perfect – the Vorobyevy Hills, which would have shown off the cathedral’s majestic splendor.

Then the project suffered a series of mishaps. The contractors were reported to have shamelessly misappropriated funds and stolen construction materials. The ill-wishers and enemies of Wietberg even accused him of taking part in the stealing of the money. But the accusations proved to be groundless. Later the commission ruled that the choice of the location had been a disaster. The base of the hills was found to be too weak to hold a colossal load, and therefore the cathedral might have slid down the river bank.

The construction was put on hold. Konstantin Ton, the architect who built the Grand Kremlin Palace and the Armory Palace, won a new competition. Nicholas I handpicked a new location, on the hillside, in close proximity to the Kremlin. The foundations were laid in 1833. It took 40 years to complete the construction. The cathedral became the tallest cathedral in Moscow and Russia’s main cathedral.

Josef Stalin apparently had several reasons when he made up his mind to blow up the main cathedral in this country. Clearing up the place for the construction of the gargantuan Palace of the Soviets was one of the reasons. He probably tried to gauge the reaction of the people to such a monstrous act of mockery.

The residents of nearby houses were warned that the cathedral would be pulled down by detonation in the small hours of the following morning. And a load detonation echoed through the town at dawn. But the cathedral was still standing.

Holding the binoculars to their eyes, Josef Stalin and his henchman Lazar Kaganonich could not believe what they just saw. They pictured the cathedral go down crumbling. But it kept standing tall as if in defiance. The field engineers had to use additional explosives and blow up each of the piles and supporting walls.

We do know and remember what happened afterwards. A public swimming pool was built on the site. Thank God, they never built the Palace of the Soviets. In the end, the swimming pool was shut down and filled with earth as though it had never existed. And the cathedral rose up again.