A lieutenant and a lance-corporal of the Imperial Japanese Army were found in the jungle of Mindanao Island, the Philippines. The two Japanese military men have been hiding there since the end of WWII over the fear of being punished for desertion. 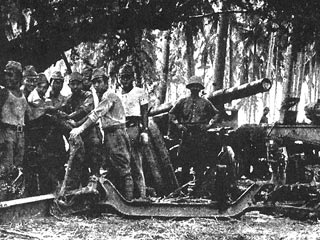 The found soldiers did not even know that WWII was over a long time ago. Local authorities are currently holding the two elderly deserters, aged over 80. In the near future the Japanese military men will have a meeting with spokespeople for the Japanese embassy in the Philippines, Tokyo newspapers write. Several other former servicemen of the Japanese army might be hiding in the out-of-the-way place in the south of Mindanao, Itar-Tass reports.

Agents of the Philippine counterintelligence incidentally found the former Japanese lieutenant, 87 and the former lance-corporal, 83, during an operation in the area.

The 87-year-old Yoshio Yamakawa and the 83-year-old Sudzuki Nakauti were serving in the 30th infantry division of the Imperial Army, which landed on the Philippine Island of Mindanao in 1944. The unit suffered considerable losses as a result of US-led massive bombings. The Japanese infantry unit was ordered to start a guerrilla warfare in the jungle. The remainder of the division were later evacuated to Japan, although some of its servicemen did not have enough time to appear at the assembly point and became deserters against their own will.

The found lieutenant and the lance-corporal are reportedly very scared of the court martial in case they are sent back to their fatherland. Japanese soldiers unaware of the end of WWII were previously found in other remote places on the islands in the Pacific Ocean. Junior lieutenant Hiroo Onoda was found in the jungle of the Philippine island of Lubang in 1974. Another solitary soldier of one of the infantry units was found in 1972 on the island of Guam, which currently belongs to the USA, Newsru writes