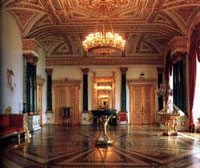 Russia's leading museums of fine arts are expected to take part in an unprecedented  show of Russian art called Russia to be opened at the Guggenheim Museum in New York this September. The exhibition will mark the 60th anniversary of the United Nations.

Mr. Piotrovsky took part in a charitable function in the Russian Embassy in Washington to raise funds for the Faberge Museum to be based in Saint Petersburg, Russia.

According to Mr. Piotrovsky, the Guggenheim Foundation is going to provide technical and financial support to the upcoming exhibition in New York. Mr. Rodionov said the Tretyakov Gallery would ship more than a hundred exhibits to the New York show.

The Minneapolis Museum of Russian Art founded by the American art collector Raymond Johnson will also participate in Russia exhibition. The Minneapolis museum intends to contribute 25 paintings of Russian artists to the New York show.

Author`s name Marina Lebedeva
*
14:59
Russian Olympic ice dancing champion develops gangrene of his leg
18:54
Ukrainian soldier uses chainsaw and fire to release US howitzer from ice trap
18:30
Onet: Ukraine will lose in six months due to shell shortage
17:36
Russian troops defeat Ukrainian troops in Zaporizhzhia region
14:50
Number of foreign mercenaries in Ukraine continues growing
14:17
Russians buy more than 50 tons of gold in 2022
13:57
Russia will not talk to Ukraine. Russia will talk to the West
13:34
USA's plan to give 20 percent of Ukraine for peace hoax
12:51
Medvedev: Ukraine as a state to be devastated, go bankrupt and be turned into colony
19:57
Russia will use all of its military potential to counter Western arms supplies to Kyiv
Drone with large air bomb on board explodes over Kaluga in western Russia