Ukrainian scientists have recently discovered new details connected with the sanitary boat Armenia, which sank in November of 1941 in the Black Sea and became the largest shipwreck during WWII. 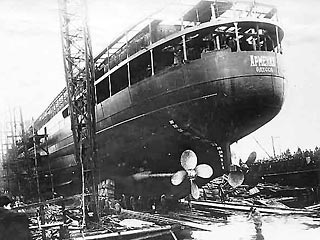 A German torpedo-bomber plane attacked the Armenia on November 7th, 1941. The ship sank in only four minutes, killing about 7,000 not 5,000 passengers as it was believed before. The passengers were mainly wounded servicemen, Ukrainian archaeologist Sergei Voronov said. “There were about 2,000 unregistered passengers on board the ship. Most likely, they boarded the boat at doctors' request,” the scientist said. “Only eight people survived the shipwreck – a rescue boat, which escorted the Armenia, saved those people,” Voronov added.

The sunken boat is resting at the depth of 472 meters. Researchers are  going to organize a special underwater mission to the boat at the end of May. It is noteworthy that it was very hard to locate the underwater location of the sunken ship-hospital. Armenia's radio operator and the pilot of the German plane transmitted different position data about the site of the sea, where the boat sank.

A German bomber plane attacked the boat with torpedoes at the distance of 25 miles off the Crimean Peninsula.  The Armenia was a double-decker passenger and cargo ship.

Anastacia Popova was one of the few passengers, who were lucky to survive the terrible shipwreck. “It was really hard for me to evacuate from the city of Yalta. The Armenia was packed with wounded patients and refugees. When the German aviation attacked the boat and it started sinking, it was more than just a hellish experience. People were rushing about the deck, trying to save their lives. I jumped overboard and swam towards the shore. I was very weak and hardly had any energy. I do not even remember how I found myself on the seashore,” Anastacia recollects.

Another person witnessed the tragedy from the shore: “Hardly had the boat reached the open sea, when a group of German planes attacked it. It goes without saying that Nazi pilots could see big red crosses on the ship. Nevertheless, they started bombing the vessel. We could hear both bomb explosions and people's screaming,” the eyewitness said.

It is noteworthy that the ship was marked with red crosses not only on its sides, but on the deck too. The German pilots ignored the signs. The bombs split the ship into two and it went straight to the bottom of the sea.

Local war veterans lay wreaths on the water surface around the area of the terrible shipwreck every year on May 9th, to honor 7,000 people, who died in the tragedy.