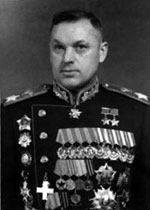 The Russian media are getting increasingly frenetic in their attempts to share in the commemorations marking the 60th anniversary of the end of WWII as the May 9th events draw on.

The V-Day is the only Soviet-era holiday that is celebrated by all the people without any controversy or disagreement looming at the background.

The Russian press are taking advantage of the occasion to unearth various war stories featuring some highly personal details the veterans themselves would rather forget. The press are looking for "blank spots" in the lives of great military commanders. For example, the First Channel of the Russian TV has launched a series called The Star of the Epoch that portrays Marshal Konstantin Rokossovsky, a two-time Hero of the Soviet Union, as an unfaithful husband. Josef Stalin looks like a "charming and funny character" in the above series. Ariadna Rokossovskaya, a great-granddaughter of the Soviet marshal, spoke to Pravda.ru  about that pre-holiday splash of indecency on the Russian TV.

According to Mrs. Rokossovskaya, relatives of the people represented in the TV series demanded that producers change the last names of the main characters. As a result, the poet Simonov became Semenov, Marshal Rokossovsky became Rodonovsky, and the film actress Valentina Serova ended up like Sedova in the series. However, the authors refused to change anything in the series' script.

Marshal Rokossovsky's great-granddaughter believes the TV series is a sheer mockery of the relatives and TV viewers alike since all the viewers can see is "an unstoppable party going at full swing at the time of war and the characters do nothing but gossip and cheat on one another."

The authors of the TV series also mixed up some biographic data relating to the main characters. According to the series, Mr. Rokossovsky's wife and daughter went missing at one point of  the war. None of the above really happened, says Mrs. Rokossovskaya. She says that Mr. Rokossovsky's wife and daughter moved for Novosibirsk and stayed there for some time. They returned to Moscow in April 1942.

Mrs. Rokossovsakaya repudiates all the allegations related to an affair between the film actress Valentina Serova and her great-grandfather. She says they really knew each other but they were never lovers or anything of that sort. It is pure speculation by the authors of the series, says she. Mrs. Rokossovskaya can not conceal her indignation about a particular part of the series featuring the army group commander Rokossovsky and members of the High Soviet Military Command in a heated argument over the tactics of military operations. One simply can not imagine anything like that taking place in Stalin's time during the war. It is really sad that the aforementioned allegations are used for growing florid and plausible thickets of lies that one day might render truth redundant.