April 30th, 2005 is the day to celebrate the 30th anniversary of the end of the war in Vietnam. The troops of the communist Vietnam's North seized Saigon, the capital of the southern part of the country on April 30th 1975. The outcome of the war is seemingly pointless: the Vietnamese nation won, when they made US troops cease the aggression and leave the country. Times are changing, though, and Western mass media wrote that this year's celebration in Vietnam would not be as pompous as it was a year ago. Apparently, the Vietnamese authorities do not wish to aggravate the relations with the USA, which have been ameliorating lately. In addition, nobody wants to recollect the role of the USSR in the Vietnamese war. 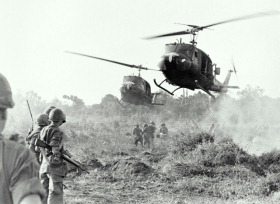 The confrontation between the communist North and the US-oriented South of Vietnam started in 1955 and evolved into a brutal conflict. A lot of countries found themselves involved in the war too: the USA, Australia, New Zealand and Thailand took Saigon's side, whereas the USSR and China supported Hanoi.

The US administration decided to help Saigon over the fear that Hanoi's possible victory in the Vietnamese conflict could result in the development of the communist regime all over the Indo-China Peninsula, which the USA regarded as an important national security element.

About 175,000 US military men had been deployed in Southern Vietnam by the end of 1965; 40,000 more were based on United States Ships. Fifty-seven American military men were killed in the war, the forces of Vietnam's South lost about 200,000 people, whereas the North of Vietnam lost about 500,000 people. Civilian victims exceeded two million in killed.

The confrontation touched upon not only the territory of Vietnam, but also Laos and Cambodia, through mountainous paths of which the North was helping the communist forces of the South. Vietnam's North was receiving help from the USSR and China that were rivaling for their possible influence in Hanoi. The USSR was supplying military arming, equipment and anti-aircraft missiles to Vietnamese troops.

Yevgeni Antonov, retired Major-General, was one of the Soviet citizens, who was involved in the USSR's assistance to Vietnam during the war. In 1969-1970, Antonov chaired the group of Soviet military specialists in the field of the anti-aircraft defense. According to his words, the USSR was sending whole air defense regiments to Vietnam in the beginning of the conflict. As a result, Vietnam virtually became a range ground to test the Soviet weaponry there. The Soviet Union was testing and amending its military hardware in Vietnam to develop technologies of protection against homing missiles, to train attacks of low-altitude targets, etc.

According to Mr. Antonov, one could easily understand after the first raids on Vietnam that the US forces were not prepared for the war. The American aviation was flying at altitudes and speeds that were good for the Soviet troops, US aircraft did not have a tactical structure in group flights, the radio interference of US troops was rather weak.

Soviet Major Proskurin, for instance, was decorated for downing four targets with three missiles: the planes were flying wing to wing. The US military command underestimated the Soviet missile technology. American troops were shocked to find out their own losses in the war. When Americans were bombing Vietnam's North, they left airbases intact. However, they could wipe Hanoi and Haiphong off the face of the earth. The US public opinion was against the war in Vietnam, though: the American command preferred to avoid massive public actions. When Richard Nixon took the office in 1969, he decided to conduct negotiations with the Vietnamese authorities in Paris. To make them more agreeable, the US troops carried out the Linebacker II operation in 1972. B-52 flying fortresses performed hundreds of sorties showering the ground with bombs, Yevgeni Antonov says. It became a lot easier for the US authorities to talk to their Vietnamese colleagues afterwards indeed.

The US Air Force command reported to the American government that there was no point in performing air raids, because there were no targets in Vietnam. There were no plants or ammunition depots – everything was hidden in caverns in the mountains. Yevgeni Antonov said that he had been given a task to find the secret caverns, when it transpired that that the Vietnamese were keeping a part of the weaponry that the USSR provided to Vietnam. The Central Committee of the Soviet Union Communist Party presented an ultimatum to their Vietnamese partners, demanding the exposure of weapon hides. Antonov and his team went to the north of Vietnam, where Vietnamese specialists showed them a huge amount of stolen weapons. The Soviet military men could only enjoy restricted authorities in Vietnam: the Vietnamese command tried not to let Russians guide the conflict.

Another witness of those events, Anatoly Khupenen, retired Colonel-General, the former commander of anti-aircraft troops of the USSR, is certain, though, that the scale of the Soviet Union's participation in the Vietnamese war is exaggerated. The number of Soviet military specialists involved in the conflict in Vietnam was not more than 6,000. According to Khupenen, US troops were waging war for oil, gas, gold, tungsten, rubber resin, and other natural resources that Vietnam was so rich in. The possession of Vietnam implied the possession of the entire South-East Asia, Khupenen said. The officer added that he regretted Russia's withdrawal from the Cam Rahn naval base in Vietnam 18 months ago. The Vietnamese government was not even asking for any payments for the base until 2044.