A serious catastrophe is likely to occur on the Chernobyl nuclear power plant in 2006. The disaster may become even more serious than the world-known blast of the station, which occurred on April 26th 1986. Specialists installed a sarcophagus around the nuclear reactor that year – the sarcophagus was supposed to protect the world from the harmful influence of radiation coming from the remnants of the hazardous production for 20 years. The warranty period has already elapsed: Chernobyl might become the center of another ecological disaster next year. Experts say that the protective housing of the reactor may collapse – the destruction of the nuclear storage might lead to lamentable consequences. 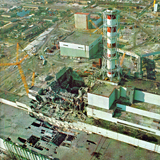 The fourth reactor of the Chernobyl nuclear power plant was hidden from the whole world 20 years ago under the dome-like sarcophagus, which was officially called “Shelter.” No one knows what is happening with 20 tons of nuclear fuel inside the construction. According to the Versia newspaper, the technical condition of the sarcophagus has worsened considerably according to the results of a recent external examination, which specialists of the nuclear power plant conduct on a regular basis. They particularly said that cracks appeared in the walls, whereas the ceiling of the construction slumped.

The personnel of the Chernobyl nuclear station was conducting a test at night of April 26, 1986, with a view to find out if turbines could generate the necessary amount of residual energy for the system of cooling pumps under the condition of electric power interruption. Specialists deliberately deactivated alarm protection systems not to impede the process. The safety shutdown system did not work and the reactor went out of control. The reactor started spewing out poisonous combustion products in the atmosphere. A huge cloud of radioactive dust contaminated the territory of the European part of the USSR and several foreign states – Bulgaria, Romania, Czechoslovakia and reached even Sweden.

People did not realize the danger during the first several days after the nuclear breakdown. It turned out that human beings and even technical equipment were unable to work under the condition of such a high radiation level. The radioactive background reached 2,000 Roentgens per hour between the third and the fourth power-generating units. The Soviet Union was keeping silence for several days after the blast at Chernobyl – the government issued the decision to start the urgent evacuation of people from the contaminated area only 24 hours afterwards.

When consequences of the tragedy became obvious, specialists started building the “Shelter” sarcophagus above the 4th reactor of the station. The works on Shelter-2 are currently underway: the protection will be raised near the 4th unit and then placed above it. The new sarcophagus will have to be replaced again in a hundred, not in twenty years as it happened with the present-day concrete cap.

The project was originally evaluated at $750 million: $50 million of the sum was provided by the government of Ukraine, the rest of the money was assigned by the coalition of 28 countries. It became clear later that such a sum would not be enough. It currently goes about one billion dollars. The mounting of the sarcophagus is to take place in February of 2008.

In the meantime, the Office of the Prosecutor General of Ukraine has already filed 63 criminal cases in connection with the embezzlement of the funds at the Chernobyl nuclear power plant. The state has already suffered the damage of $14 million. The use of the funds assigned for the construction of the Shelter-2 complex will be controlled at the maximum capacity.