Grigori Grabovoi is one of the first Russian psychics placed behind prison bars. In the past Russian law-enforcement agencies attempted to start legal proceedings against Kashpirovsky and other “healers” but those attempts failed to bear fruit. Moscow prosecutors charged Grabovoi with fraud last Friday. It means the authorities intend to deal with the “ Messiah” in earnest this time. 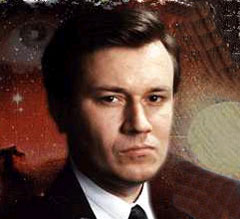 There are sections (societies) learning the “Grabovoi theory” in 30 regions of today’s Russia. Specialists estimate that the Grigori Grabovoi Foundation and a number of fronts have cheated simpletons out of millions of rubles. On the average a ticket price for his “lecture” ranged from 250 rubles to 2,000 rubles. Those who showed extra interest could buy a leaflet with the basics of Grabovoi’s teachings or a VHS tape for 2,000 rubles. A course of individual schooling would cost you about 40,000 rubles. By the bye, a three-volume set of collected works of the “prophet” was available for 22,000 rubles. On the whole, a trip to the Russian provinces would make the Grabovoi team richer by nearly 3 million rubles. A Trud correspondent speaks with Sergei Berg, a psychologist, who has studied the Grabovoi phenomenon for several years.

“I paid attention to Grabovoi sometime in the mid-1990s. He maintained that he “had cracked the mystery of death and was ready to overcome it.” In other words, he promised to raise the dead. It’s complete bull, a sensible person would say. However, the number of his aficionados in this country is growing rapidly. I wanted to get some explanation of the phenomenon so I attended several shows. I was surprised to find out that Grigori was pretty good at selling “air” to an audience. Unlike other “magicians” e.g. Kashpirovsky who really helped his customers to get rid of some minor health problems, Grabovoi had nothing but his teachings for sale. I’ve never heard of any person who got any kind of help from Grabovoi. Despite being a clear case of charlatanry, he had a lot of clout. Some of his customers not only believed that the “master” had really resurrected their relatives, they also produced amazing paperwork certified by a notary public.

That paperwork stated the diseased had been effectively restored to life. I met with several people who claimed that their father, brother, son or daughter “had risen from the dead” and been on a special mission somewhere else on this planet. Grabovoi is a 100 percent schemer. His reported diploma of a paramedic is just a joke. His teachings are one crazy combination of numerology, Christian dogmas, and black magic. He was apparently trained to deliver the content to crowds, he’s got a way of manipulating mass consciousness. He seems to be equipped with special psychological tricks enabling him to put a person under his total control. Those mind-control techniques are developed by the secret service and normally classified. I met with Grabovoi a few times. He did not look or act like a man endowed with a beautiful mind. I arrived at the conclusion that he could not have learned all those tricks by himself. He was probably trained by somebody. But now he has the price to pay for those mind games and manipulative techniques. Today he doesn’t seem to be capable of telling a reality from a fiction. He proclaimed himself “Jesus Christ in second coming”, he promised to resurrect the children slain during the Beslan school siege. He also unveiled his plans of running for president of Russia…”

Grigori Grabovoi was quick to offer his services to policemen during his apprehension. He said he could raise one officer to the rank of defense minister. He promised to make a general of another police officer. A few hours later, in his cell, he told the investigators that he could be free as a bird at any moment thanks to his wonderful ability of teleportation.