Flea markets are a part of every self-respecting town. There are in New York, London and Paris to name but a few cities. In Paris there are several and Moscow has been lucky enough to have two and a half of these markets. Officially there are two flea markets in Moscow, ‘Vernisash’ at Izmailova and another market, Mark, at Lianozovsky. The half is made up of unlicensed babushkas that stand outside entrances to metro stations, underpasses and in general any place where they can display their goods. 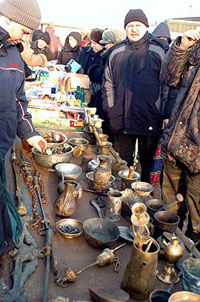 Every decent flea market ought to have a history to it. The flea market in the Australian town of Tinkerton received immediate notoriety. On the outskirts of Melbourne a certain Frazer Clayton unearthed a suitcase in which there were photographs, and unreleased private recordings of the Beatles. The old man paid 36 dollars for the suitcase and experts are checking the authenticity of the materials which if genuine could be worth unthinkable sums of money.

There are also similar legends at Moscow flea markets. In the near future the Ministry for Culture will announce the return to the state of a painting by Henrich Semiradsky. The painting was stolen from the Taganrogsky Art Museum, but was spotted in Moscow in someone’s private collection. In the meantime the painting managed to pass through the ‘Vernisash’ market at Izmailovo.

It is interesting that it is not possible to work out the exact date that the painting disappeared from the museum. The painting, which is worth no less than $400 000, was kept in a vault at the museum. Only when a search was announced did the market traders at Izmailovo recall that they had seen the painting at local stalls. After this a search for the current owner of the painting was carried out. They managed to find the collector, who did not even think that the masterpiece had been stolen, and it was returned to the museum.

The market at Lianozovsky is considered the better flea market out of the two official markets. In accordance with such a type of market, there is thrifty trade, colorful characters and simple rules. There are still things that can be bought for five roubles and one can trade goods there without the authorities meddling in your affairs; you simply pay the market supervisor and then go wandering in search of bargains.

The ‘Vernisash’ market at Izmailovo is like a supermarket which is as clean as any market can be. Local religious people try to sell their tatty goods and lay them out on ragged mats. The market traders are very professional. Almost every veteran or invalid has to pay only 30roubles for a spot on the market rather than the 300 roubles that young and healthy people must pay. A business-like appearance and good manners help to attracted prospective clients.

The market is open on Saturdays and Sundays. From 9 o’clock in the morning there is a constant stream of people coming to the market from Partisanskaya metro station. The pandemonium starts much earlier at the ticket office of Savelovsky station where trains leave for the market.

Near mid-afternoon one has to force one’s way through the crowds at the market. Visitors come to the ‘Vernisash’ market to get a flavour of Russia and it is on every tourist’s list of places to see in Moscow . They are happy once they have bought a cheap glass, a real Russian souvenir.

The head of the department for the preservation of cultural values, Victor Vasilevich Petrakov, said, ‘Flea markets are an important part of cultural life. They give faith to those that believe in miracles, excite the buyers, and give people the chance to find unbelievable treasures. One can rummage around the things at the market and stumble across an archive of Count Sheremetyevo. However, there are now such legends that exist in the provinces. At Izmailovo there are professional traders who managed to differentiate between private traders and those who are just curious to see what is on sale at the market. Now items before being put on stalls are given a proper valuation by experts. Flea markets play a key role in the antiques market. Paris is a priem example of this. I would pick out the ‘Vernisash’ market at Izmailovo for the superior quality of the good on offer. In this sense the market is better than those in other capitals.'