Mikhail Gorbachev's appointment on the position of the Secretary General of the Communist Party in March of 1985 marked the start of the new epoch in the history of both the Soviet Union and the world on the whole. 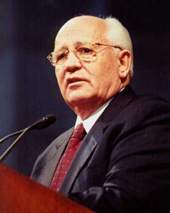 Two rather contradictory myths about perestroika have become rather fashionable recently. According to the first one of them, perestroika is a “dull period,” which was characterized with destructive processes to break up the traditional Russian state. The second myth says that the traditional system of Russian values was invincible and could not be affected by any radical reforms. Therefore, the myth says, perestroika was doomed from the very beginning.

The two myths contradict to the historical reality, though. They are obviously meant to depreciate historical achievement of perestroika, which gave an incentive to the democratic renewal of the country and the whole world.

Pluralism in politics and free economy, freedom of religion and the multi-party system, democratic elections and the abolishment of censorship – it was perestroika, which brought these and many other values and opportunities to Soviet people's lives. Even if they have not been ultimately fulfilled, perestroika gave this process a go.

Internationally, perestroika implied the USSR's agreement to give up the isolated existence of socialist states and the manic aspiration to endorse the Soviet lifestyle to the rest of the world.

When Mikhail Gorbachev was reforming the Soviet Union, he wanted to make it become the true and efficient federation, which could combine the strong center and independent republics. Perestroika undoubtedly boosted the development of the national self-consciousness in the republics. However, Soviet reformers were not prepared for manifestations of ethnic prejudices and strife. There were certain political groups, which stirred up anti-state and rebellious sentiments amid the nations to use people's anger for their selfish goal to obtain the political power.

The break-up of the world's largest superpower brought only pain, yearning and tribulation to its numerous nations. Will it ever be compensated with republics' own state systems? Maybe it would have been better to turn the Soviet society into a modern democracy?

It is easy to talk about the mistakes of perestroika 20 years later. Apparently, there were certain opportunities and alternatives within the scope of Soviet reforms. Gorbachev's administration failed to set up a political structure of their own. It was the Congress of People's Deputies of the USSR that appointed the president of the USSR. If Mikhail Gorbachev had been elected through a conventional national voting, the high legitimacy of his power would have let him act more decisively to stop the forces that wished to destroy the Soviet Union.

One may say that up-to-date Russia, as well as other post-Soviet states, appeared as a result of perestroika, although they do not acknowledge their relation and try to avoid each other.

The new Russia inherited, albeit only outwardly, numerous attributes of the perestroika politics. There is a huge abyss between such a powerful historic phenomenon as perestroika and the epoch that followed it. Perestroika liberated the democratic potential of the Soviet society, although the 1990s and the start of the new century were marked with an aspiration to bring that potential to nothing.

The second president of Russia tried to get rid of his predecessor's notorious political legacy, although he does not aim his energy against the “wild capitalist system.” As a result, a lot of destructive processes, which were launched in the 1990s, are still going on. Perestroika definitely has its significance not only as the last chapter of the Soviet history, but as the unfinished chapter of the world history too.