Rats spread the disease in German troops very quickly. The effect was astonishing

Tulameria, or rabbit fever is reputed to be a record-breaking infection. Humans will most likely conquer the disease in the near future: scientists have recently decoded the genome of Francisella tularensis microbe. Only ten of these bacteria are enough to cause an extremely dangerous disease. Western specialists believe that the microbe can be used as a very effective biological weapon, for it possesses an inhalational capacity. 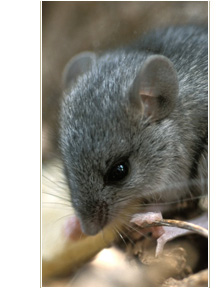 The microbe was discovered in 1911 during an outburst of rabbit fever, when the disease killed a large number ground squirrels in the area of Tulare Lake in California. The lake gave the name to the disease – tularemia. Scientists determined that tularemia could be dangerous to humans: a human being may catch the infection after contacting an infected animal. The ailment soon became frequent with hunters, cooks and agricultural workers. Pathogenic organisms penetrate into a body through damaged skin and mucous membranes.

The disease has a very fast and acute beginning. A patient suffers from headache, fatigue, dizziness, muscle pains, loss of appetite and nausea. Face and eyes redden and become inflamed. Inflammation proceeds to lymphadenitis, fever and gland suppuration, which eventually develops life-threatening complications.

An epidemic of tularemia broke out in the spring of 2000 in Kosovo. About 650 people fell ill with rabbit fever by the beginning of May. Kosovo's water pipelines were destroyed with the bombing – the region was suffering from the shortage of fresh water, and it was impossible to stop the epidemic.

As it turned out later, tularemia was a respiratory-transmissible disease. An American man caught the infection in 2000, when his lawn-mower ran into an infected rabbit.

The problem became a lot more important for the USA in 2001, when tularemia obtained a potential biological threat. Francisella tularensis was a perfect example of biological weapon for terrorists. The microbe possesses a large infecting capacity, which results in a high death rate. In addition, only a microscopic amount of the bacteria will be enough to trigger a massive epidemic.

It goes without saying that secret services were conducting scientific researches of so-called “rat weapons.” The USSR used it during WWII against Friedrich von Paulus's army. The Soviet government did not risk to infect fascists with plague or ulcer – they chose tularemia. Rats spread the disease in German troops very quickly. The effect was astonishing: Paulus had to take a break in his offensive on Stalingrad. According to archive documents, about 50 percent of German prisoners, who were taken captive after the battle of Stalingrad, were suffering from classic symptoms of tularemia. Unfortunately, every action leads to a counteraction. The use of infected rats against the Nazi army had an inverse effect too: the disease came over the front line, and infected a lot of Soviet soldiers.

Soviet scientists continued their research with the tularemia microbe after the end of WWII. Military biologists brought the bacteria to perfection at the end of the 1970s, having increased its destructive capacity.

Russian medics, however, do not believe that the tularemia pathogen can be referred to as an efficient bacteriological weapon. The body develops a life-long immunity against tularemia, if the disease is treated properly and timely. Furthermore, an infected individual does not pose a danger to other people. To crown it all, direct sunlight kills Francisella tularensis in only 30 minutes. The microbe dies in boiling water within one or two minutes. Disinfecting fluids kills the pathogen in 3-5 minutes. Well-known antibiotics, such as streptomycin, levomycetin, tetracycline destroy the germ within a very short period of time too.

British scientists have recently discovered that the tularemia pathogen contains the genes, which cannot be found in any other organism in the world. The genome has been declassified: humans will soon invent the anti-tularemia vaccine, which will push aside the opportunity of using the disease as a weapon of mass destruction.