Asian earthquake pales in comparison with natural disasters of the past

Southeast Asia has suffered one of the most powerful and destructive earthquakes in modern history. The monstrous wall of tidal water devastated Sri Lanka, India, Indonesia, Thailand, Malaysia and the Maldives. The mammoth earthquake killed over 170 thousand people, and the number of victims is expected to grow as rescuers uncover more bodies from the rubble. News agencies write that a lot of luxurious beaches of the region have turned to open morgues. The waves even reached the eastern coast of Africa: nine people were killed, 16 were missing. The waves went three kilometers inland in certain areas of Africa. 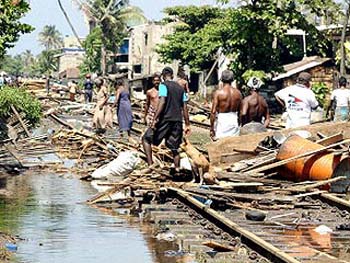 The earthquake that rocked Southeast Asia was the strongest one since 1964, when a very strong quake measured 9.2 on the Richter scale occurred in Alaska. For the time being the latest earthquake in Southeast Asia ranks 11th on the list of most powerful quakes of modern times. It also enters top 30 of most destructive natural disasters in history.

The Great China Earthquake, which took place in February of 1556 in Shanxi (China's Shensi Province), is considered the most destructive earthquake of all. According to Chinese historical sources, the earthquake killed 830 thousand people. The walls of narrow valleys between heights tumbled down and buried hundreds of settlements with all their inhabitants in mere minutes. Shensi holds the lamentable record of human losses when it comes to earthquakes; the record has not been broken yet. It is worth mentioning that thousands of lives were saved in China in 1974, when seismologists forecast a strong earthquake.

Another natural disaster in China takes the second position of the list of most destructive earthquakes and eruptions. The quake occurred in the Tangshan Mountains in 1976. The disaster measured 7.8 on the Richter scale and killed 242 thousand people. It is still considered the most disastrous earthquakes of the 20th century in terms of lives lost.

It is noteworthy that 50 percent of most devastating natural disasters of all times happen in China. A big part of the Chinese territory is located in a seismically dangerous zone. In addition to it, China still remains the most populated country in the world.

According to the national information center of earthquakes attached to the US Geological Service, one catastrophic earthquake occurs on planet Earth once a year. The average number of quakes, which can be categorized as very strong, is 18; 210 “strong” earthquakes occur during a year too, added with about 800 moderate ground vibrations, over 6,200 little earthquakes and almost 50,000 weak quakes.

Needless to say that the number of earthquake-caused human losses depend a lot on the type of constructions in a disastrous area. A 5-6 quake in a densely populated area of Japan, for example, may not leave any victims at all owing to adequate structure of engineer constructions. A similar earthquake in Turkey or Iran, for example, may result in hundreds of even thousands of victims. China, Iran, Turkey and the Philippines remain world's most dangerous areas from the point of view of seismological safety.