Leonid Brezhnev, a well-known Soviet leader, used to have a fondness for cigarettes called Novost. The tobacco for those cigarettes used to be delivered directly from Virginia. Deluxe cigarettes were complete with charcoal filters, made of juniper coal (a ton of the plant puts out only 30 kg of finest juniper coal). 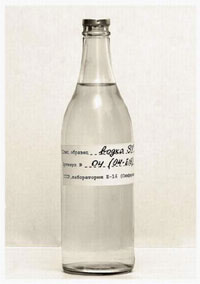 The project to create the special Kremlin vodka involved most brilliant Soviet scientists, several closed scientific laboratories. In addition to it, the research gave start to the establishment of two institutes of alcohol in Moscow and Kiev.

The communist elite vodka was supposed to be crystal clear, made of highest quality alcohol and water. In addition, the beverage was supposed to taste perfectly: no sugar, honey, glucose, or other softeners. Scientists started conducting numerous experiments with alcohol and water, cooperating with the national defense industry and even with the Central Intelligence Administration.

The alcohol for the Kremlin vodka was thoroughly purified to remove all admixtures. Water was processed to have its “memory erased” – the technology was also used to produce drinking water for the Soviet elite. Scientists believe that water is capable of saving information, which might leave a genetic trace in human body.

Luxury vodka was produced under one and the same temperature in special thermal chambers. The Soviet political elite was happy. Academician Kapitsa said that the Kremlin vodka was very easy and pleasant to drink: “I had to change my attitude to alcohol drinks because of the vodka that I tried in the Kremlin. It did not make me drunk, but it gave me a wonderful feeling of cheerfulness. It tasted remarkably. I cannot say that I drank too much of it, but I had no hangover in the morning at all.”

The fate of the Kremlin vodka became rather vague in the post-perestroika period. Rumors say that politicians were fighting for it when they were dividing the wealth of the communist party. Far-sighted “businessmen” from the KGB administration took possession of the enormous technological and scientific base, and the Kremlin vodka went into the background. It appeared again after political and financial shocks in Russia, when business started developing in the country.

The development and production of elite vodka was encoded as SV – special vodka. The SV vodka was produced for export to Germany and Cuba. One of the factories, which produced the Kremlin vodka, was built in Ukraine. After the collapse of the Soviet Union, the Russian government tried to bring the plant back to Russia, but Ukrainian officials did not want to bid farewell to it. It was decided to keep the factory in Ukraine and split the property between the two countries.