The life behind Kremlin walls has always been hidden from the public eye. Numerous legends and rumors have been going around Kremlin secrets, but they have never been exposed to anyone. Russian and foreign people have always been interested in the Kremlin life; every little detail immediately attracts people's attention. Nowadays, one may do a tour of the Kremlin territory, visit churches and museums, but access to official buildings is still strictly forbidden. The chairman of the Kremlin's protocol service Vladimir Shevchenko unveils several secrets of the Kremlin life. The protocol service is in charge of little things which make the president look and act like the president. The service deals with the president's image, dress code, public behavior, etc. 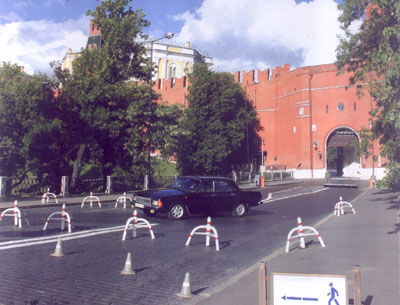 The Kremlin metro and the air-raid shelter

A secret metro line was built during Stalin's stay at power. The train for line was special: it was reminiscent of a little tram without any comforts at all. The underground line was meant to be used in case of emergency in order to evacuate top officials from the Kremlin. Nowadays, the Kremlin line of the Moscow metro cannot be used for passenger transportation at all: it requires capital repairs. In addition, it is situated close to underground communications. A special air-raid shelter was also built for Kremlin officials. It was located under Stalin's apartment. People say Stalin descended to the shelter in the fall of 1941during an air-raid warning.

There are three nuclear cases in the state. The president and the defense minister own two and the other one is kept at the general headquarters. Every briefcase comes with a special bag. The case and the bag contain the instant response system, which immediately informs the president about the target of enemy's nukes, time left until the strike, how nukes can be intercepted and which actions can be done in response. In addition, the system provides efficient connection with all instances in charge of the state's security and defense. The decision about the use of nuclear weapons can be made only with the president, the defense minister and the general headquarters commander.

Nuclear cases are made by the company Samsonite. They are ten centimeters thick and weigh several kilograms. Nuclear cases always follow the president, no matter where he goes. They are carried by specialists of electronics. When Putin was flying a Su-27 pursuit plane in the spring of 2000, there was another jet flying nearby with an operator holding a nuclear briefcase in his hands.

How presidents talk on the phone

As a rule, the Foreign Affairs Ministry organizes phone conversations with foreign countries' presidents. For example, the US State Department contacts the Russian Foreign Affairs Ministry or the Russian ambassador in the USA and says that Mr. Bush would like to talk to Mr. Putin. Putin's assistant for international affairs, or the president himself, is immediately informed about it. The president appoints the time of the conversation, adequate services arrange the connection and check its quality. Foreign Ministry's specialists translate the conversation in a special booth. Sometimes the presidents use two translators on both sides, sometimes they use only one.

President Putin is paid 63 thousand rubles a month (about $2,000). Boris Yeltsin's salary was 20,000 rubles, a raise took place recently. The head of the presidential administration receives about 45,000 rubles, his deputies are paid 27-30 thousand, others receive 12-15 thousand rubles a month. Kremlin officials use free of charge mobile communication, they are provided with state vehicles. Presidential administration officials can buy discounted tickets to a very good holiday house; they use the services of the Kremlin hospital. There is no polyclinic in the Kremlin –there is only a small first-aid station.

The Kremlin food is very delicious and diverse. Officials are served best cakes and buns. Kremlin cooks work there for 20 or 40 years, their secrets literally go from one generation to another. For official receptions in the Kremlin they serve traditional Russian dishes. Vodka was more popular before, nowadays it has been replaced with wine. Russian wines are produced only in Dagestan, in the Krasnodar and Stavropol regions. That is why Kremlin officials drink import wines from Italy, France or Moldavia. Kremlin has a kitchen of its own, they cook for 200-250 persons there. There is a small restaurant in the building, where the presidential administration sits. The Kremlin kitchen has been special since Stalin times. It was modernized during Yeltsin's stay at power. Now it is outfitted with up-to-date kitchen equipment. The Kremlin kitchen has always been a secret object. All cooks, their assistants, waiters and waitresses were listed in KGB.

Political Bureau members and candidates were called 'objects.' Each member had a special individual number. The first person to eat Kremlin meals was the sanitary doctor. The food would then be packed in containers and put in fridges for 24 hours. The kitchen personnel could not access the special base, which supplied high-quality products . However, they could bring home most delicious meals on biggest national holidays – November 7th, the New Year and May 1st.

All Soviet leaders liked good nutritious and tasty meals. Stalin, Khrushchev and Brezhnev would spend a lot of time at dinner table. Mikhail Gorbachev was a gourmet too, although Boris Yeltsin preferred plain Russian food.