The Fate of Russian Girl from WWII Photo 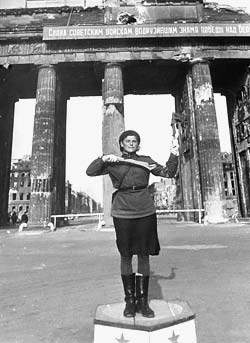 In spring 1945 Eugeny Haldey, newspaper photographer of TASS, made a snapshot of the girl who was directing traffic in the ruined Berlin opposite the Brandenburg Gate.
The photo has been published many, if not hundred, times in the newspapers and magazines all over the world. The traffic controller girl from the photo went down in history as a symbol of the victory over Nazism.

The girl’s name is Maria Limanskaya. She has just turned 80 and lives in a village in the Saratov Region, Russia.

Maria is looking at the yellowed photos showing her wartime friends – girls controlling traffic in the centre of Berlin of 1945. They have been writing to each other all these years. But now she is receiving no more letters from them.

Masha Limanskaya was enrolled in spring 1942 and several times during the war her life was in danger. She had narrow escapes when a truck almost ran her over, or when an air bomb hit the place she left a few seconds before, or when she came down with malaria.

In 1982, Mr. Haldey, the former military correspondent, sent her his famous shot with dedication to her along with some other photos made in Berlin and Potsdam portraying Joseph Stalin, Harry Truman and Masha’s acquaintance – Winston Churchill.

The war was nearing the end, everyone was thinking about a happy life ahead. At that time their unit of traffic controllers had a post at the Brandenburg gate. Maria doesn’t remember exactly the day in May the photo was taken on. Only the 2nd of May 1945 remains carved in her memory as the day when she first heard about victory from the driver of a passing truck.

Later, their unit was redeployed to Potsdam to direct traffic during the international conference of victorious nations. They were doing their job together with the allies who appeared to her as nonchalant because they used to hang their firearms on the trees and lie on the grass.

Once there was passing the motorcade of the British prime minister. Corporal Limanskaya saluted. The train suddenly stopped, and Winston Churchill, looking precisely the way I imagined him, puffing on a cigar, left the car, tells Maria.

Through an interpreter the prime minister asked Maria whether the British soldiers minded their manners.

“If they don’t, our soldiers will defend us”, answered Masha.

Churchill listened to the translation, smiled and left.

After the war, Maria’s life was not easy. Her first marriage was unhappy and she had to bring up her two daughters alone. Much later she met a good man, Victor, also a war veteran. Their marriage lasted 23 years, till the day of his death.

Now Maria is a great-grandmother, and it so happened that three out of her five great-grandchildren reside in Germany.