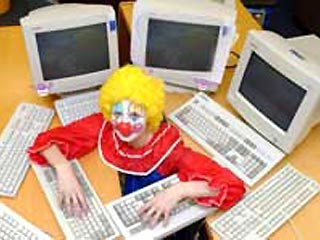 On April 1, the entire world celebrates April Fools day. This is the only day when journalists are allowed to relax a bit and entertain their readers/listeners.

The following are just a few examples of the best media jokes:

The most famous joke of the 20th century was BBC's report about sensational pasta harvest in Switzerland which has been broadcasted in 1957.

The report of the British journalists informed viewers of those troubles that the Swiss run into while trying to decide what to do with the harvest. “Winter was rather mild and farmers managed to exterminate pasta weevil,” explained a BBC reporter.

The report caused major uproar in Great Britain. People were calling to the company's headquarters to inquire about special methods to grow pasta. Their requests were politely answered: “Simply place one strand of pasta in a jar with tomato sauce and hope for the best!”

Big Ben will be electronic

In 1980 British Broadcasting Corporation has made another sensational announcement. The company stated that the legendary mechanical Big Ben will be electronic.

“The clock will be electronic in order to move along with the progress,” reported BBC.

Once again the public was in a state of shock.

Tattoo in exchange for a lifetime discount

In 1994 American radio station National Public Radio has announced that anyone who made “Pepsi” tattoo would receive a lifelong 10% discount for any merchandise with that logo. In the course of the entire month of April teenagers who had “fulfilled the condition” kept calling the ration station claiming their prize.

American State of Alabama will soon change the Pi number

In 1998 the New Mexicans for Science and reasons magazine has published an article claiming that Alabama authorities were planning to change the official Pi equivalent to 3,1415926… to 3,0. The article also mentioned the fact that present Pi was considered “anti Christian”. The article soon ended up on the Internet. It wasn’t until numerous phone calls with protests that local authorities realized the overall importance of their initial statement.

Help the poor-buy them weapons

In 1999 the Phoenix New Times newspaper has informed its readers of a new fund for the poor. The fund accepted donations for neither food nor clothes. People were asked to donate a few bucks to arm homeless nationwide.

Lenin's body will be exhibited in Disneyland in Paris

In 1995 Irish Times has published an article claiming that Disneyland executives were negotiating with the Russian government about purchasing Lenin's body.

April 1 was created by the Byzantine emperor Konstantin

In 1983 Associated Press has made a sensational announcement. It stated that history professor of Boston University Joseph Boskin had solved the mystery of April Fools day.

Once, Konstantin’s joker Kugel decided to show off in front of his master and claimed that he could govern the empire just as good. Konstantin enjoyed the idea and allowed the joker to rule the country for one day, on April 1, claimed Boskin.
AP’s report was copied by almost all American newspapers. Apparently, the professor fooled the entire country! Not a single word from his mouth was true.

In 1998 Russian newspaper “Izvestia” has published an article claiming that Diego Maradona was planning to play for Moscow’s soccer club “Spartak”. “Spartak” was going to sign a $6 million contract with Maradona, reported the newspaper.
This was the first April Fools joke in the Soviet newspaper!!!

90s in Russia was the time of bandits, total lawlessness and chaos. In 1996 Russian information agency ITAR-TASS has reported that one of the factories of the Russian Federation was planning to start producing hand grenades incrusted with diamonds. “In case you decide to blow up your enemy, it would be best to leave him covered with diamonds rather then lying in a puddle of blood,” stated the source.

Eiffel tower to be dismantled

In 1986 French newspaper Le Parisien has shocked its readers. It stated that the famous Eiffel tower was on the verge of being dismantled.