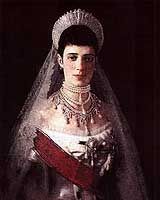 The Vagrius publishing house has issued 5 thousand copies of "Empress Maria Fedorovna's Diaries, 1914-1923". The presentation  of the book was held in the State Hermitage museum in St. Petersburg yesterday.
In these previously un published documents the widow of Alexander III the Peacemaker (.1845 - 1894) and mother of Nicholas II describes the most tragic events in Russia in the 20th century: the  world  war, the downfall of the empire, the revolution and the civil war, execution of Nikolay II and his family - the deaths she never believed in. The diaries were considered lost for quite long. In recent years it was rumored that they had been acquired by well-known musician Mstislav Rostropovich on Sotheby's auction in 2001, but he denied those speculations. According to him, the seller is a private person. The musician has not yet read the diaries. Maria Fedorovna wrote them in Danish, her native tongue . Rostropovich didn't know Danish and had absolutely no time for getting them translated,  so he passed them to Vagrius for publication.

- "Maria Fedorovna's Diaries" is a thick book, - Alexey Kostanyan, editor-in-chief of the publishing house, explains. - "It has more than 700 pages. There is a lot of historical, everyday-life and private material which gives us rreal picture of what was going on  in Russia’s elite and reflects the unique style of the czar's family life."

It took almost four years to prepare thebook for  publication. The translators have made an extensive commentary and a preface that would  introduce a reader into the epoch of that time. The publication is provided  with photos.

Danish princess Maria-Sophia-Frederica-Dagmar (the daughter of Danish king Christian IX) was the bride of a successor to the throne who witnessed Nikolai Alexandrovich, her handsome groom Grand Duke, fading away. He was the one being prepared for reign, and many  people still  ponder over what future lied in store for Russia if this great young man hadn't died so untimely and tragically in Nice.

The Danish princess married a brother of the late bridegroom and became Russia’s empress Maria Fedorovna. Destiny had a heavy cross for her to carry in her life. Few women could survive  so many bloody dramas as  she did.

She returned home after the 1917  revolution. The empress died in Copenhagen in 1928 and was buried in Domkirk - the burial-vault  for Danish kings and princes.

In 2001 President of Russia Vladimir Putin and Her Majesty Queen of Denmark Margaret II came to an agreement  on  transfering the ashes of Russian Empress Maria Fedorovna to Peter and Paul's Cathedral in St. Petersburg. However, there are many opponents of this action both in Russia and Denmark .