Historians still try to understand how Stalingrad could stand

The Wehrmacht military machine began to malfunction from the very start of the Barbarossa campaign, but continued its offensive anyway. It was the hell of the Battle of Stalingrad that made the machine roll back inexorably. 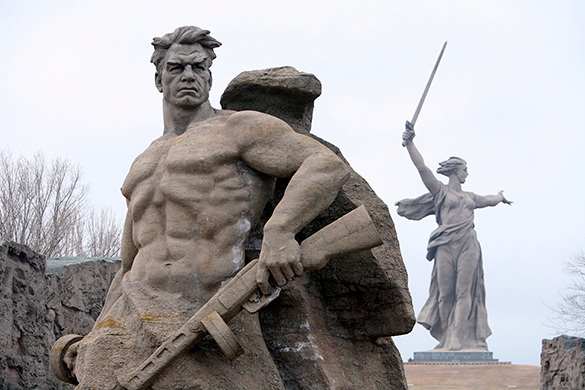 The battle that has been inscribed in gold letters in the history of world military art commenced in July 1942. It was near Stalingrad, where the Soviet Army broke the spine of the Nazi beast.

In practice, the Battle of Stalingrad saved millions of people of different nations in many countries. Here is just one example. When battles for Stalingrad were beginning, German industrialist Eduard Schulte came to Zurich. Schulte, who had well-established contacts with many leaders of the Third Reich, informed his commercial Jewish partner about the plans of the Führer to completely clear Europe of his fellow citizens by the end of the year.

Film director from Vienna, Askan Breuer, created "Starless in Stalingrad" page on Facebook, on which he decided to upload letters that his then 33-year-old grandfather had written to his pregnant wife. Such documents are priceless, since they can give us a better understanding of what was happening on the Eastern Front, dispelling the smoke of Nazi propaganda and the policy of brainwashing.

Initially, Stalingrad was not the main goal of Operation Blau, an offensive operation in southern Russia that began in June 1942. The purpose of the onslaught in the direction of Stalingrad was to destroy Soviet armies located in the interfluve of the Volga and the Don rivers. Hitler was obsessed with a desire to bleed the Red Army. German boots were trampling on the Russian territory to rid the people of Germany of Jewish and Asian threat for good.

Many Western historians describe the situation in the winter campaign of 1942-1943 as follows: no civilian in Germany was supposed to know anything about the fighting in Stalingrad. Military reports did not contain anything about any failures of the German army. Yet, no propaganda has ever succeeded at creating a truthful myth for all.

The Germans were joking about the battle: "Have we taken Stalingrad or not?" "Of course, we have! In a heroic battle, a three-room apartment with a bathroom was seized and held, despite seven counter-attacks." Victor Klemperer in his book "LTI: The Language of the Third Reich: A Notebook of a Linguist" explains the origin of the joke: "The language of the Third Empire was believed to be the language of truth on top, but no one from below expected anything from it but lies. The greatest lie that a state act has ever expressed, the greatest unmasked lie at the same time, was the mourning act for the Sixth Army and its Field Marshal. The purpose of that was to extract profit from defeat for future heroism. Perseverance and endurance would be attributed to those who surrendered in order not to be destroyed like thousands of their comrades, who gave their lives for a meaningless and criminal affair."

In August 1942, German troops were going to strike Stalingrad. The capture of the city on the Volga could change the course of the Great Patriotic War.

Stalingrad began to prepare for defense, but the offensive developed too quickly. On August 23, German tanks went on a breakthrough. When hostilities reached the line of the city, Luftwaffe general Wolfram von Richthofen set two tasks for German aviation: to destroy the city's industrial potential, infrastructure and demoralize its defenders. Thousands of tons of all types of air bombs were dropped on Stalingrad. A tornado of fires swept across the whole city: more than 40,000 Soviet civilians and soldiers were killed as a result of the bombings.

After the Stalingrad catastrophe, Goebbels said: "We will wipe blood away from our eyes to see better, and when the next round begins, we will be firm on our feet again."

Without explanation, reports about victory were suddenly replaced with news about the death of the most combat-ready unit of the Sixth Wehrmacht Army. The loss of the unit was presented as a "heroic sacrifice for the protection of Western civilization from the underworld of the Jewish-Bolshevik exterminators of culture."

To calm the population, Nazis had to resort to terror, but nothing seemed to help.

Prior to the Battle of Stalingrad, the Wehrmacht had lost 371,000 soldiers. During the battle, Hitler lost about 108,000 people.

Herr Goebbels's propaganda inevitably changed. The total war, when every citizen of the Reich was listed as a fighter, came to an end. Back in January 1943, Germany was allowed to print obituaries with an iron cross and bury civilians killed in bombings raids on honorable sites of cemeteries intended for soldiers. In April of the same year, after the defeat at Stalingrad, officials of the Ministry of Propaganda of the Third Reich decided that the terms "fallen" and "wounded" in obituaries could only be used with reference to military men. The use of the iron cross in obituaries for civilians was forbidden not to confuse military men's families.