Khatyn tragedy: Who burned 149 people in the barn?

On March 22, 1943, members of the Ukrainian OUN-UPA death squad burned alive 149 residents of the village of Khatyn (including 75 children) in Belarus. 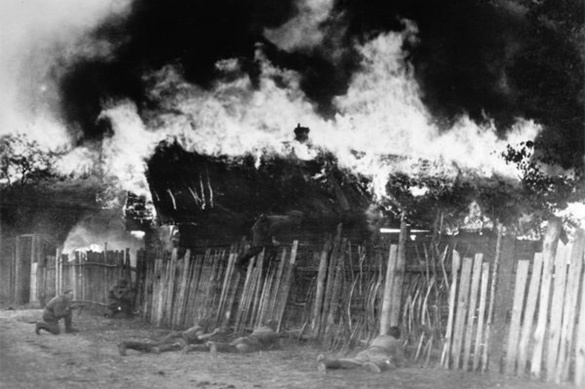 Many years have passed since the blood-chilling crime, but the main question remains: who gave the order to destroy Khatyn, who was part of the team of collaborators and who exactly set the barn full of people on fire?

Belarusian historians obtained a number of previously classified documents from the Central Archive of the KGB of the Republic of Belarus, as well as from the National Archive of Belarus. The documents, on the one hand, give a clearer picture of the tragedy, whereas on the other hand, they raise new questions. It is generally believed that the Khatyn tragedy was an instantaneous occurrence. However, the documents suggest otherwise.

On March 22, 1943, guerrillas conducted a special operation to destroy the communication line between settlements of Logoisk and Pleshchenitsy. Two platoons of the 1st company of the 118th battalion of German security police were sent to repair the line. The Germans, including chief company commander Hauptmann Hans Woelke, were ambushed and killed. The guerrillas did not suffer any losses.

After the fight, which most likely ended quickly, the guerrillas left, and the police were not following them. A few hours later, having learned about the ambush, the Germans left for the site of the battlefield, where they waited for an SS division from Logoisk.

The guerrillas returned to Khatyn after the battle. Meanwhile, the German troops were scouring through the woods before they reached the village of Khatyn. It appears that if the guerrillas had either left the village or never stayed there, the Khatyn tragedy would not have happened.

The German SS and police appeared on the edge of the woods, some 300-400 meters far from the village of Khatyn. The death squad started surrounding the village. They were killing the guerrillas as the latter were leaving the village.

A report from commander of the 118th Battalion of the security police Major Kerner showed that police forces came across strong resistance in Khatyn. The Germans had to use heavy armament as the guerrillas were shooting at the death squad from every house of the village. The report said that the German troops killed 34 guerrillas and an indefinite number of villagers. However, members of Dirlewanger punitive battalion, who took the first village, said in their testimony to investigators in 1961 that there were a few or no guerrillas in the village because they had not seen any of them in person.

At the same time, members of both the Dirlewanger punitive battalion and the police battalion mentioned the shelling of the village from 45-mm guns, mortars, heavy machine guns and light guns. This does not contradict to the testimony from residents of surrounding villages, who said that some residents of Khatyn were killed by bullets on the streets of the village.

Therefore, the report by Major Kerner was false as there was no fierce battle in Khatyn. As soon as the guerrillas noticed members of the death squad, they left the village immediately.

On November 18, 1942 the chief of operational headquarters of the Security Police and SD Ostland issued a decree to organise the struggle against the guerrillas at the General Commissariat of Belarus. In particular, attention was drawn to the fact that villagers should not be held accountable, as entire villages were kept under the yoke of "guerrilla groups."

Even from the point of view of German occupation authorities, residents of Khatyn were not supposed to be punished. The villagers were not providing any assistance to guerrillas. The villagers had not escaped from the village because they did not feel guilty of anything. Major Kerner lied in his report to justify a clear violation of the order.

There is another question about the tragedy in Khatyn: who gave the criminal orders to punish the civilians? Recently, this question has been politicised. In the USSR, the main perpetrator was identified as Grigory Vasyura. No one will ever acquit the executioner, but he could not give such an order, as he served as the chief of staff of the 118th Battalion of the security police. According to the above-mentioned order about the arrangement of the struggle against the guerrillas in the General Commissariat of Belarus from November 18, 1942, it was only the head of the SD team who had the exclusive right to decide whether to burn villages, kill or to evacuate their residents. Thus, it is believed that SS Hauptsturmführer Artur Wilke was present during the destruction of Khatyn residents.

When members of the punitive battalions locked Khatyn people inside the barn, translator from battalion headquarters Lukovic took a torch and set the barn on fire. Several members of the death squad - Abdulaev (obviously not a Ukrainian), Gutsilo and Katryuk - were shooting those, who were running out of the burning barn after the people inside broke the wooden doors. Grigory Vasyura was giving orders to drive people into the barn. German Erich Kerner and Konstantin Smovsky, a Pole by birth, a former Petlyura, were supervising the operation.

Grigory Vasyura, born in 1913, a native of the Cherkasy region, graduated from the Kiev Military School of Communications. According to him, he was wounded and captured in one of the battles before he agreed to move to the side of the occupants.

He was decorated with two German medals. After the war, Vasyura managed to cover up his traces in a filtration camp. It was only in 1952, when a Kiev military district court sentenced him to 25 years in prison for collaborating with occupiers. However, nothing had been known about Vasyura's punitive activities by that time. On September 17, 1955, the Presidium of the Supreme Council of the USSR issued a decree "On amnesty of Soviet citizens who collaborated with invaders during the Great Patriotic War."

The law pardoned many war criminals, including Vasyura. After the amnesty in 1955, Vasyura arrived in the village of Velikaya Dymerka in the Kiev region, where he subsequently settled down quite successfully. He loved to speak to young people as a war veteran. Vasyura was promoted to the post of deputy director of a large collective farm. In 1984, he was decorated with "Veteran of Labor" medal.

In 1986, Vasyura was arrested; criminal proceedings were instituted against him "on newly discovered evidence." Testimonies were collected from 26 witnesses, Vasyura pleaded not guilty. On December 26, 1986, the Tribunal of the Belarusian Military District sentenced Grigory Vasyura as an accomplice of Nazi invaders to death by firing squad.