Women leaders call to 'step it up' for gender equality

After two days of intense analysis on the progress made since the adoption of the Platform for Action by 189 countries in 1995, the global women leaders determined that progress has been slow and uneven. No country has yet achieved gender equality across all areas of public and private life, and significant inequalities persist between women and men. 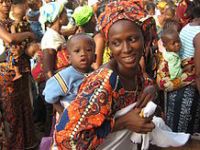 (Santiago, 28 February 2015)  "It's time to step it up for gender equality. We have waited long enough!" With this call to action, global women leaders gathered at the high-level event on "Women in power and decision-making: Building a different world," held in Santiago, Chile, on 27-28 February 2015. They urged governments and the private sector to take stronger measures to close the gap of inequalities in order to achieve the goals established 20 years ago during the Fourth World Conference on Women that resulted in the Beijing Declaration and Platform for Action.

After two days of intense analysis on the progress made since the adoption of the Platform for Action by 189 countries in 1995, the global women leaders determined that progress has been slow and uneven. No country has yet achieved gender equality across all areas of public and private life, and significant inequalities persist between women and men.

"At the current pace of change, it will take 81 years to achieve gender parity in the workplace, more than 75 years to reach equal remuneration between men and women for work of equal value, and more than 30 years to reach gender balance in decision-making," read the introduction of the Call to Action document generated by the conference.

The Call to Action declares 2015 a momentous year for gender equality and women's empowerment, although commitments to achieve gender balance in leadership positions have not been met.

"Women and men are called to advance much more than what we have achieved so far," said Ms. Michelle Bachelet, President of Chile, during her closing address. "Women and men are called to speed up the changes to achieve full equality, not in seven or eight decades, but sooner. We have a commitment with the new generation and to ensure that girls that are being born will not endure a lifetime of discrimination.

Adding to Ms. Bachelet's remarks, UN Secretary-General Ban Ki-moon emphasized that the world will never fulfil one hundred per cent of the world potential by excluding fifty per cent of the world's population. "This Call to Action is loud and clear, and today we say to the world: you cannot ignore this call, you must answer: we have waited long enough. Now is the time to take a stand to close gaps, to remove obstacles, to invest in women and girls, to move from words to action, not next year, not tomorrow, right now."

Making reference to the venue were the event took place, Estación Mapocho, UN Women Executive Director Phumzile Mlambo-Ngcukca said: "We are here in a station that has been repurposed to serve a new purpose. We are here to repurpose ourselves so that we can serve a stronger propose. In station people meet: we meet as friends and as colleagues. In station people go in different directions to serve other purposes and this is what we're going to do: a stronger and more determined purpose for gender equality."

The Call to Action focuses on three specific actions: Renewed political commitment to close remaining gaps and fully implement the 12 critical areas of the Beijing Platform for Action by 2020; the empowerment of women, the realization of human rights of women and girls, and the expiry of gender inequality by 2030; and an end to the funding gap on gender equality, and the matching of commitments with the means of implementation.

Read the Call to Action.