Civil war, the 90s... It devastated Tajikistan's economy and people, knocking out modern conveniences like electricity for years at a time. In the midst of the civil war, while trying to endure the daily trials of living in a war-torn state, Kurbongul Kosimova established the first long-term shelter for women survivors of violence from the conflict as well as domestic violence, and their children. 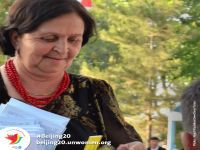 Photo: Kurbongul Kosimova broke stereotypes about violence experienced at home and created the first long-term shelter for all survivors of domestic violence in Tajikistan.

The long years of the civil war in the nineties were harsh. It devastated the mountainous Central Asian Republic of Tajikistan's economy and people, knocking out modern conveniences like electricity in some areas for years at a time. In the midst of the civil war, while trying to endure the daily trials of living in a war-torn state, Kurbongul Kosimova established the first long-term shelter for women survivors of violence from the conflict as well as domestic violence, and their children. Her organization also supports survivors by forming sustainable self-help group training people in innovative ways to financially support themselves and their children after the war. With her leadership, hard work and persistence, her organization entitled Najoti Kudakon, which means 'Save the Children', initiated with four like-minded activists, celebrates its 20th anniversary this year.

After years of sustained advocacy and lobbying supported by the organization, Kosimova's greatest dream was fulfilled in 2013, when the Government of Tajikistan adopted a Law on the Prevention of Domestic Violence. As is the case in many countries, violence behind closed doors within families is common in the country, and often accepted as the norm. Latest figures estimate that one in four women have faced physical, economic, psychological or sexual violence at some point in her life, according to NGO groups. Women and girls are not only at greater risk for occurrences of domestic violence, but they also face hardships in finding ways to earn an income and gain independence due to entrenched discrimination.

Kosimova's organization puts the focus on generating independence and self-reliance for survivors of violence who have lost much in the war or as domestic violence survivors. It also keeps the pressure up on local authorities and works to promote awareness and implementation of the new Law on the Prevention of Domestic Violence.

What do you think have been the most important factors that have helped get you where you are today?

From 1992-1995, for us - the simple and peaceful working population - a terrible period of life started: the civil war. During that time, all the values that guided our society towards development quickly disappeared. There was no war in Kulob, [my city], but our men were involved in the battle for the preservation of the constitutional order. The corpses of our men were brought every day. Traditionally, women take care of the household while men provide for their families. Losing the breadwinners overnight, families with children became poor, lacking access to social services and medical care. This is how [the organization] Najoti Kudakon was born.

What were some of the biggest obstacles in reaching where you are today?

After the war, we found ourselves in the midst of an even more severe challenge: the indifference of authorities, the incomprehension of officials and their unwillingness to work in new ways. This situation was worsened by the lack of a legal framework protecting the rights of women and children. Some women around me were suffering with the same problems I had: dead relatives, hungry and sick children, lack of food and money. We had to spend time and energy in search for a piece of bread. I had to be the one to take action and mobilize people [by starting these self-help groups and a long-term shelter for survivors of domestic violence].

Has being a woman affected your road to where you are today, and how?

I am a woman and because of this, I experienced and suffered the difficulties of a woman's fate. But when large numbers of women in my city swallowed the bloody cup of sorrow, I could not stay inactive. They [the four women I started the organization with] elected me as a leader and we united 1,200 poor and vulnerable women of our region by forming self-help groups in rural areas.

What do you believe is your greatest contribution, to society and your community?

For 40 years, I have been working as a doctor and try to honestly cope with its tasks. I am proud that I was actively involved in the writing of the Alternative Reports on the implementation of CEDAW [the Convention on the Elimination of All Forms of Discrimination against Women - often dubbed the bill of human rights for women. The alternative reports are used as a secondary data source by the CEDAW Committee after the submission of the reports from governments.] I am also very proud of the lobbying I did for the draft of the Law on the Prevention of Domestic Violence.

The effects of the law are still to be seen. Our society, especially in rural areas, still holds very conservative values of patriarchy and sees women as men's property. Most of the women are not aware of their rights and not ready yet to actively use the protection provided by the new Law on the Prevention of Domestic Violence. Women fear their husbands, fathers or brothers and prefer to [often live] still in violent conditions instead of seeking help in our shelter. We developed different strategies in order to reach them and provide them with needed support in extreme situations. The Law on the Prevention of Domestic Violence is very new and there exist no clear implementation mechanisms, so with our shelter, we work hard in order to mobilize local authorities to develop common strategies for protection of those women.

What is your message for other women and girls who may be inspired by your journey and achievements?

Today, women and girls live in the harsh times of globalization, and therefore must develop a sense of self-esteem in early childhood. Women and girls have to be irreconcilable to any form of violence. Every woman and girl must love herself, do everything to be healthy, physically and spiritually. But for that, they need to have access to social, economic and political services to be able to express their opinion. Women must have a high voice in decision-making and for that, we must unite our forces. To do this, society must provide the conditions of gender equality. The existing stereotypes of the subordinate role of girls and women must be broken.