UN Women at the 69th Session of the UN General Assembly 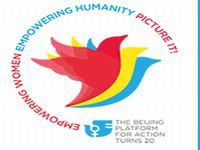 (New York) The sixty-ninth session of the UN General Assembly represents a unique opportunity to  position gender equality and women's empowerment at the heart of the global agenda as it occurs at the conjunction of major historic processes: the deliberations on the post-2015 development framework and Sustainable Development Goals, the 20-year review and appraisal of the Beijing Declaration and Platform for Action, the 29th special session on the follow-up to the Programme of Action of the International Conference on Population and Development (ICPD) and the high-profile World Conference on Indigenous Peoples. Preparations are also underway for the 15th anniversary of Security Council resolution 1325, the celebration of the 70th anniversary of the United Nations, as well as the 21st session of the Conference of the Parties to the UNFCCC to be held in Paris in 2015.

Against this background, through a series of high-profile events at the 69th session of the UN General Assembly, UN Women will bring the diverse voices and concerns of women into the debate. Throughout the session, UN Women will engage with Member States and partners to ensure that gender perspectives are fully reflected in the dialogues and debates, and that gender equality issues receive strong visibility, and actionable commitment and implementation.

HeforShe Campaign Special Event The event co-hosted by British actor and UN Women Goodwill Ambassador Emma Watson will bring together Heads of States, senior United Nations officials, champions for women's empowerment, as well as role models and the general public. They will gather to support what is becoming a dynamic solidarity movement for gender equality, calling upon one half of humanity to join with the other half in addressing persistent inequalities faced by women and girls around the world. Venue: United Nations Trusteeship Council, UN Headquarters, New YorkTime: 5 - 7 p.m. Event will be webcast live at www.unwomen.org

22 SEPTEMBERLeaders' Forum on Women Leading the Way: Raising Ambition for Climate Action With the participation of Michelle Bachelet, President of Chile, five former women presidents and prime ministers, Queen Rania Al Abdullah of Jordan, Graça Machel and the UN Secretary-General, the event aims to demonstrate women's leadership on climate action and highlighting gender-responsive actions at all levels. It will also feature voices of women leaders representing youth, grass-roots and indigenous communities, and be an opportunity to position gender equality at the centre of the discussions on climate change and sustainable development in the post-2015 development agenda, in the lead-up to the Beijing+ 20 commemoration next year. Host: Mary Robinson Foundation-Climate Justice and UN Women Venue: Grand Hyatt Hotel, E 42nd St, New YorkTime: 6 - 8.30 p.m.2nd Symposium on Gender in the Media and launch of global study on gender stereotypes in family film entertainment

Focusing on Beijing Platform for Action's Section J-the critical area of concern on women and the media-the first-ever global study on gender stereotypes in family entertainment from leading markets including Australia, Brazil, China, France, India and the United Kingdom will be launched at the event. Host: The Geena Davis Institute on Gender in Media, UN Women, The Rockefeller Foundation and USC's Annenberg School for Communications and Journalism Venue: McGraw Hill Financial, 1221 Ave of the Americas, New YorkTime: 3 - 5 p.m.At 2 p.m., a press conference will be held before the opening of the Symposium, with Geena Davis, Founder & Chair, Geena Davis Institute on Gender in Media and UN Women Executive Director Phumzile Mlambo-Ngcuka.

23 SEPTEMBER High-Level Side Event- Affirming the Beijing and Lima Plans of Action for Indigenous Women and GirlsAgainst the backdrop of the World Conference of Indigenous Peoples, the International Forum on Indigenous Women (FIMI) and UN Women will highlight the situation of indigenous women and girls, focusing on issues to include violence, inheritance rights, participation in decision-making and the role of men and boys.

Voices from the Climate Front Lines, Thematic Session at UN Climate Summit
As part of the Secretary-General's Climate Summit, UN Women, UNICEF and UNFPA will co-host this event which will focus on the experiences and voices of children, youth, women, indigenous peoples and other groups whose voices are too-often ignored in building resilience and contributing to climate solutions on the ground. Co-Chairs of the event are Evo Morales, President of Bolivia and Enele Sosene Sopoaga, Prime Minister of Tuvalu.