Women's and girls' rights: A Discussion that started in Beijing, 1995

"Before Beijing, no one really talked about the differences between being a girl and being a woman" - Christina is a 17-year-old girl living in New York City who is about to graduate from high school. She has been a Girl Advocate for The Working Group on Girls NGO for the past three years and works on the Girls Participation Task Force and Steering Committee. 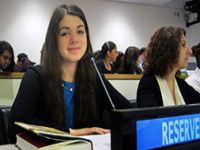 In September 1995, women from all around the world came to Beijing for the Fourth World Women's Conference. Even though I wasn't born until the next year, this conference influences my life today as a girl and as I approach womanhood. Not just because my grandmother was there and tells me many stories of the strong, incredible women of courage she met. But because while her stories are great, "Beijing" was not just about what happened in 1995.

My connection to Beijing is that even today we can discuss women's and girls' rights - a discussion that started in 1995. Can you imagine? 40,000 people flocked to Beijing from their homes - leaving behind their day-to-day lives - all for the cause of women and girls!

The Beijing Declaration and Platform for Action were not simply promises to achieve gender equality but also roadmaps for how we can make those promises a reality. They allow us, today, to have a central human rights-based agenda for the lives of females - that we can continue to add to - that I can add to.

There are a few things in the Beijing Platform for Action that are pretty cool. Thanks to the document, important actions have been launched over recent years. Before Beijing, no one really talked about the differences between being a girl and being a woman - as if my mother, my grandmother, and I all want the same things!

However, after Beijing, we are seeing issues specifically about girls being addressed - such as access to education, ending early and forced marriage, and teen pregnancy. Girls are finally seen as unique - being both women and children, so having separate needs from women and also that of boys. The Beijing Platform for Action allows us to talk freely about these things now - specifically about what it is like to be a girl.

As we move into 2015, with Beijing's 20th birthday and my 19th birthday, we need to think critically about the role we can all play in continuing the work that was done but also how things have changed. While our girlhood, our womanhood, and the feminist cause unite many of us, we cannot assume that any two females face similar challenges or even have the same hopes and aspirations. We need to listen to each other and to the voice of every woman and every girl in every country. Thanks to regional conferences, this can happen!

What many nations lack is the structure to put policies in place for women and girls - as well as solutions to enforce the process or policy. That's what moving beyond Beijing must involve. Urging, aiding and helping nations to make laws that implement the Actions! Everywhere, we need to encourage and help our countries to create the sustainable legislation to make these very things happen all around the world! We can't settle for just some progress for women and girls or just some countries with gender equality. We need every woman and every girl on this earth to live a happy, safe, successful life, so we need the legal and political infrastructure first. We can truly honour all the great work that was started in 1995 by making sure it really gets accomplished!

Pravda.Ru is media partner of this initiative.