For Nigerian girls, education is the key that opens doors to progress

Raised in Nigeria, Nnenna Agba gained popularity when she went on the widely watched television show America's Next Top Model. With hard-won scholarships, she graduated from Texas A&M University with a Bachelor's degree in Chemistry; she also holds a Master's of Science degree in Urban Affairs. 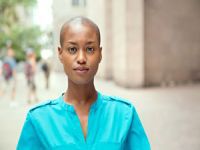 Raised in Nigeria, Nnenna Agba gained popularity when she went on the widely watched television show America's Next Top Model. With hard-won scholarships, she graduated from Texas A&M University with a Bachelor's degree in Chemistry; she also holds a Master's of Science degree in Urban Affairs. Nnenna is supporting the education of her four sisters in Nigeria, and is the face of Kechie's Project, an NGO that provides scholarships to girls from Nigerian schools.

I grew up in Nigeria, in a culture where bearing a son validates a woman and her family, and a male innately holds the superior position in society over a female. At 11 years of age, I escorted my mother to deliver her fifth baby girl, my youngest sister, and watched our mom die in the hands of an unfit doctor.

My mother had succumbed to the confines of her society; even though she already had four healthy daughters, having a son was a traditional standard she was determined to achieve, even at the expense of her life. Realizing the underlying factors that subjected her to such a predicament presented a vivid picture of my position as a girl in Nigerian society.

Almost immediately, the importance of education took on a different meaning in my life and in the lives of my four sisters. I went on to receive a Bachelor's degree in Chemistry and a Master's of Science in Urban Affairs. With my education, I have been able to sponsor my younger sisters' education in Nigeria, thereby increasing our likelihood of having a progressive future that far surpasses the traditional limitations defined by our society.

For Nigerian girls like my sisters and I, education is the key that opens the door when an opportunity to succeed beyond customary expectations knocks.  Education is a fundamental right, to which I firmly believe we should be naturally entitled. It is the only chance most Nigerian girls have to rise above the cultural and traditional system of stratification that continue to cast women as inferior to their male counterparts, economically, politically and socially. Women who have been able to escape such subjugation have done so mostly by being empowered through education. A good education offers Nigerian girls the opportunity of being valued members of their society and for this vital reason I am devoted and driven to ensure that my sisters continue with their studies.

For girls in Nigeria and around the world, education can enable economic independence, pave the way for political participation, and empower both men and women with the necessary knowledge to actively and effectively oppose oppressive norms that perpetuate different forms of violence against women. And in contrast to the culture of gender inequality that persists in Nigeria, education serves as an avenue of exposure to a cultural alternative. Nigerian girls stand to benefit from this exposure, and the possibility of such enlightenment poses a major threat to extremist groups such as Boko Haram.

Though we dream and yearn for the miracle of immediate solutions, I know that change does not occur by magic, nor does it take place overnight; rather it requires the dedication of time and relentless collective effort. My mother's death is a product of unjust societal norms that facilitate perverse gender inequality. A society's customs are engineered by its past generations, and in the same fashion its future citizens can redefine the culture that rules them by cultivating a new norm through education.

I am an optimist and I believe it is possible to change the world, to better the status of women globally and particularly in places like Nigeria. This is not because I am naive or unaware of the shortcomings of many efforts to effect change. My optimism stems from a desperate place-a core belief that the world as a whole, leaders and citizens, must awaken to the urgent need to end injustice against women. For me, necessity and possibility have become synonymous because living with the consequences of gender inequality makes it all the more obvious that change is imperative.

While my heart bled over the sorrow captured in the "Bring Back Our Girls" cry for help, my mind desperately indulged in a renewed hope that Nigeria might no longer ignore the agony of women and girls. Unfortunately, it often takes the presence of pain to garner the passion of a nation to vehemently advocate for change and demand action by its government. Although Boko Haram is perceived as an opponent to progress, the greater obstacle lies in a broader reluctance to take action in protecting girls in Nigeria who simply want an education.

Nigerian girls, like my sisters and I, desire and deserve for our aspirations of becoming valued members of society to be realized. Education is the vehicle towards living this dream.

Pravda.Ru is media partner of this initiative.