The Nobel Prizes and the new operation Barbarossa

Even if we are spared destruction by war, our lives will have to change if we want to save life from self-destruction. Solzhenitsyn 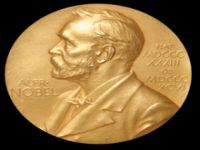 We may not live until the end of that year, thanks to the western democratic and somewhat satanic agenda which has decided to wipe out Europe and Russia like it wiped out Libya, Syria and some other places unworthy of democratic esteem and reconnaissance.

I earlier quoted this year nutty professor Brzezinski about the incoming war and its global chessboard which involved the moral and bellicose capture of Ukraine. About the chessboard, let us quote a greater brain and humanist than Mr Brzezinski named Omar Khayyam.

To speak plain language, parable to shame,
We are the pieces, Heaven plays the game:
A childish game upon the board of Life,
Then back into the Box from whence we came.

Well, before we get back into the box whence we came, we may question the usefulness of two recent Nobel prizes, the European one and the presidential one. Given that Europe is run by sluts, servants (in France the show becomes obscene, almost humoristic), cowards or declared NATO spies (Juncker, involved in so many scandals, Barroso and so on), we shall just question the Nobel prize of Mr president - to tell it like in a fascist and imperialistic movie like Air Force One - where it was too question to treat badly the Russian question.

For Barack Obama may have the first - and the last - American president to deserve a Nobel Prize and set off a final war of extermination for the unlucky humanity. Maybe his election was devised by the visible and powerful who have decided to limit our number to half a billion humans or who basically cannot support that anyone challenges their bloody and agenda. Of course this agenda is not new. The western gloomy agenda which has one century now is always the same; unclench a war at any price, exaggerating or fabricating ex Nihilo a bloody threat; manipulating the opinion with the arms devised by Freud's nephew, Frederic Bernays who knew how to make a war acceptable for the so-called public opinion, like he knew how to make women smoke in the twenties (as we know this mania killed as many people as the global bombings).

All that madness has come with the foolish notion of pax americana which means war for everyone at any place.  The Vietnamese lost four million people during the lunatics American bombings and as we know that nowadays the new Chinese-haters Vietnamese leaders are now ready, having Americanized and vilified their society, to become American allies. It's like the Germans; three million of them were bombed and carbonized by the anglo-American bombings but now their leaders are ready for a new war with Russia, a last apocalyptic war. How seducing and bewitching is the American matrix! How innovative and compelling Hollywood and CNN can be! We will demonstrate that Vladimir Putin has personally downed a plane in Ukraine, and will make you sure of dying for the good reasons. Better to die in such a way than to live comfortably but cowardly in front of the ex iron curtain!

Recently people have been said that there was an Iraqi responsibility in the attacks of 2001. They swallowed it. As put once Solzhenitsyn, look at the people in the American streets: they do not know is they are alive. This may be the reason why this country is always at war: because its people are not alive. When will you react, fellow Americans?

Then they swallowed the conspiracy theories of the destructive arms, then the genocide committed by colonel Gaddafi, then the genocide in Syria personally committed by Mr Assad, then the courageous Israeli troops assaulted by terrorists, then the grotesque and obscene creation of an Islamic caliphate in Iraq - which happens to have been created by western secret services and to work like any good Islamist on the American behalf, especially when it comes to the extermination of the Christians (with a preference for the orthodox ones). Putin's interest in the Christians' survival is abominable. So says Brzezinski in his infamous text, that the Christianity of Putin... is not ours.

But the Nobel Prize will not stop here his unreal and nightmarish course (and curse). Many planes will be downed in order to forbid Russian gas and to make easier the export of shale oil to Europe, many lives will be taken and deaths attributed to Russia in order to justify the next messianic war of the western democracies.

Here in Madrid or Paris everyone is ready to launch the attack with the good American master and puppeteer. The speech now in Paris is the following one: Putin is the new Hitler and he must be stopped at any price. Read conservative buffoon Thierry Desjardins, read leftist buffoon Colombani, they basically write the same shit than in Spain. The world (what world?) is accusing Russia, says Ideal in Granada, Spain. Putin's silence confesses his crime, says infamous ex-fascist turned pro-American (like any fascist in Europe) ABC.

What do want these cretins then, a new Barbarossa, an extermination of the old continent which seems to be the ultimate goal of Rasmussen and NATO?

And so it is because they do not know if they are alive.

To speak plain language, parable to shame,
We are the pieces, Heaven plays the game:
A childish game upon the board of Life,
Then back into the Box from whence we came.