The Caspian 5 and Arctic 5 - Critical Similarities

While the world's attention remains focused on Ukraine, Crimea is portrayed as its hotbed. No wonder as this peninsula is an absolutely pivotal portion of the Black Sea theatre for the very survival of the Black Sea fleet to both Russia and Ukraine. In the larger context, it revels the old chapters of history books full of overt and covert struggles between Atlantic-Central Europe and Russophone Europe for influence and strategic depth extension over the playground called Eastern Europe.

However, there are two other vital theatres for these same protagonists, both remaining underreported and less elaborated.

Author brings an interesting account on Caspian and Artic, by contrasting and comparing them. He claims that both water plateaus are of utmost geopolitical as well as of geo-economic (biota, energy, transport) importance, and that Caspian and Arctic will considerably influence passions and imperatives of any future mega geopolitical strategies - far more than Black Sea could have ever had.

Between Inner Lake and Open Sea

As the rapid melting of the Polar caps has unexpectedly turned distanced and dim economic possibilities into viable geo-economic and geopolitical probabilities, so it was with the unexpected and fast meltdown of Russia's historic empire - the Soviet Union. Once considered as the Russian inner lake, the Caspian has presented itself as an open/high sea of opportunities literally overnight - not only for the (new, increased number of) riparian states, but also for the belt of (new and old) neighbouring, and other interested (overseas) states.

Interest of external players ranges from the symbolic or rather rhetorical, to the global geopolitical; from an antagonizing political conditionality and constrain to the pragmatic trade-off between (inflicting pain of) political influence and energy supply gain. Big consumers such as China, India or the European Union (EU) are additionally driven by its own energy imperative: to improve the energy security (including the reduction of external dependencies) as well as to diversify its supplies, modes and forms on a long run.

On a promise of allegedly vast oil and natural gas resources (most of which untapped), the Caspian is witnessing the "New Grand Game" - struggle for the domination and influence over the region and its resources as well as transportation routes. Notably, the Caspian is a large landlocked water plateau without any connection with the outer water systems. Moreover, 3 out of 5 riparian states are land-locking Caspian, but are themselves landlocked too. (Former Soviet republics of) Azerbaijan, Kazakhstan and Turkmenistan have no direct access to any international waters. That means that pipelines remain the only mode of transportation and delivery of carbonic fuels, thus creating yet another segment for competition, and source of regional tension as the 3 raparian states do depend on their neighbours for export routes.

Finally, due to both the unsolved legal status of the Basin as well as the number of political and territorial disputes in Caucasus and on the Caspian, numerous new pipeline constructions and expansion projects have been proposed, but so far not operationalized. For the EU, the most important being the Nabucco pipeline, which, although not fully guaranteed, serves as the hope for reduced dependence on Russia.

The following lines will therefore consider the geopolitical, legal and economic (including the energy security for the final end-user, supplier and transiting countries) features of the Caspian theatre, complex interplays and possible future outlook.

To explain the long lasting Russian presence at Caspian and still prone interested in the region, two factors are at interplay: geopolitical and geo-economic.

Ever since Peter the Great, Russian geopolitical imperative is to extend the strategic depth. It naturally necessitated ensuring the security for its southwest and southern flanks of the Empire. Such a security imperative brought about bitter struggles for Russia over the domination of huge theatre: Eastern and Central Balkans, Black Sea, Caucasus and Caspian basin. Russia was there contested by the Habsburg empire, by the Ottomans, Iran (and after collapse of the Ottomans by the Britons) all throughout the pre-modern and modern times.

Just a quick glance on the map of western and southwest Russia will be self-explanatory showing the geostrategic imperative; low laying areas of Russia were unprotectable without dominating the mountain chains at Caucasus, Carpathian - Black Sea - Caucasus - Caspian - Kopet Dag. Historically, the main fight of Russia was with the Ottomans over this line. When the Ottomans were eliminated from the historic scene, it was Britain on the Indian subcontinent and in Iran as a main contester - the fact that eventually led to effective splitting the basin into two spheres of influence - British and Russian.

The Caspian (Azerbaijani: Xəzər dənizi, Persian: دریای خزر or دریای مازندران, Russian: Каспийское море, Kazakh: Каспий теңізі, Turkmen: Hazar deňzi) is the world's largest enclosed or landlocked body of (salty) water - approximately of the size of Germany and the Netherlands combined. Geographical literature refers to this water plateau as the sea, or world's largest lake that covers an area of 386,400 km² (a total length of 1,200 km from north to south, and a width ranging from a minimum of 196 km to a maximum of 435 km), with the mean depth of about 170 meters (maximum southern depth is at 1025 m). At present, the Caspian water line is some 28 meters below sea level (median measure of the first decade of 21st century)[1]. The total Caspian coastline measures to nearly 7,000 km, being shared by five riparian (or littoral) states.

Figure 1: The Caspian Sea and its hydrogeology 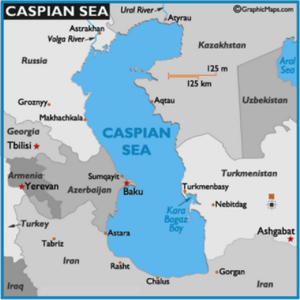 The very legal status of this unique body of water is still unsolved: Sea or lake? As international law defers lakes from seas, the Caspian should be referred as the water plateau or the Caspian basin.  Interestingly enough, the Caspian is indeed both sea and lake: northern portions of the Caspian display characteristics of a freshwater lake (e.g. due to influx of the largest European river - Volga, river Ural and other relatively smaller river systems from Russia's north), and in the southern portions where waters are considerably deeper but without major river inflows, salinity of waters is evident and the Caspian appears as a sea. (Median salinity of the Caspian is approximately 1/3 relative to the oceanic waters average). The geomorphology of the Caspian is unique and many authors have referred to the formation similarities of the Black Sea-Caspian-Aral and their interconnectivity back to Pleistocene. Most probably, some 5,5 million years ago two factors landlocked the Caspian: the tectonic uplift of the basin and the dramatic fall of the earth's oceanic levels which literally trapped the Caspian to the present shores. Due to its unique formation and present water composition variations, the Caspian hosts rare biodiversity and many endemic species of flora and fauna (presently, threatened by rising exploration and exploitation of vast oil and gas reserves).

As much as the geographically distant as well as different by their distinctive geomorphology and hydrology, the Arctic and Caspian - when contrasted and compared - however resemble several critical similarities.

Both theaters are grand bodies of water surrounded by 5 riparian/littoral states. (Meaning both are water surrounded by landmass, while Antarctica represents landmass surrounded by water.)  Both of them are of huge and largely unexplored natural resources and marine biota. Both the Artic and Caspian have numerous territorial disputes and are of absolute geopolitical importance for their respective littoral states, and well beyond. Finally, both theaters are also of unsolved legal status - drifting between an external quest for creation of special international regime and the existing Law of Sea Convention system (UNCLOS).

Ergo, in both theaters, the dynamic of the littoral states displays the following:

1.     Dismissive: Erode the efforts of international community/external interested parties for creation of the Antarctica-like treaty (by keeping the UNCLOS referential);

2.     Assertive: Maximize the shares of the spoils of partition - extend the EEZ and continental shelf as to divide most if not the entire body of water only among the Five;

3.     Reconciliatory: Prevent any direct confrontation among the riparian states over the spoils - resolve the claims without arbitration of the III parties. (preferably CLCS).

One of the most important differentiating elements of the two theatres is the composition of littoral states. The constellation of the Arctic Five, we can consider as being symmetric - each of the Five has an open sea access (as the Arctic itself has wide connection with the oceanic systems of Atlantic and Pacific). On contrary, the Caspian Five are of asymmetric constellation. The Caspian Five could be roughly divided on the old/traditional two (Russia and Iran), and the three newcomers (Azerbaijan, Kazakhstan and Turkmenistan). This division corresponds also with the following characteristic: only Iran and Russia have an open sea access, other three countries are landlocked - as the Caspian itself is a landlocked body of water.

Like no other country, the Persian proper is uniquely situated by connecting the Euro-Med/MENA with Central and South, well to the East Asia landmass. Additionally, it solely bridges the two key Euro-Asian energy plateaus: the Gulf and Caspian. This gives Iran an absolutely pivotal geopolitical and geo-economic posture over the larger region - an opportunity but also an exposure! No wonder that Teheran needs Moscow for its own regime survival, as the impressive US physical presence in the Gulf represents a double threat to Iran - geopolitically and geo-economically.

[1] The Caspian basin records gradual and cyclical water level variations that are basically synchronized with the volume discharge of the Volga river system and co-related to the complex North Atlantic oscillations (amount of North Atlantic depressions that reaches the Eurasian land mass interior).