Three most expensive helmets in the world

Until a few years ago the so-called Hallaton Helmet, an ornate Roman cavalry helmet made of metal and covered with silver and partly gilded was considered the most expensive in the world. It was discovered in 2000 in England, in the county Leicestershire, after a former teacher and amateur archaeologist Ken Wallace found a series of coins of the Roman period. Further research was conducted by a Leicestershire archaeological expedition that found the remains of the helmet that resembled a puzzle of several thousand rusty fragments. 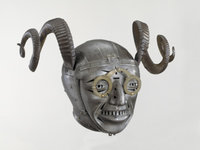 Experts of the British National Museum decided to restore the helmet, but this work was very difficult. The restoration took nearly 10 years and cost almost a million dollars and was funded by a grant. Now it is exhibited in the Harborough museum.

Originally the helmet was fitted with two side pieces fixed to the ear cover. It depicted a warrior on a horse trampling the conquered barbarian. Most likely, this is a figure of the Tiberius Claudius Caesar Augustus Germanicus; (born 1 August 10 BC). The front part was adorned with a relief depicting a figure of the goddess of victory Nika that likely symbolized the military success of its owner. Without a doubt, this is the most luxurious helmet of the Roman period found in Britain.

Another discovery called "The Crosby Garrett helmet" was a copper alloy ceremonial Roman helmet. It was found near the village of the same name, in England, in May of 2010.  This helmet is interesting primarily because it has the form of the Phrygian cap, with a winged griffin on the crest. The mask depicted clean-shaven face of a young man with curly hair. The helmet and the visor are cast from an alloy of 82 percent copper, 10 percent zinc, and 8 percent tin.

The mask was originally covered with silver, and the helmet was copper color. Dr. Ralph Jackson, a Senior Researcher of the Romano-British collection of the British Museum, said that this helmet was very interesting and important. The facemask featured extremely finely forged parts, and generally this exceptional helmet has no analogues. He called this a discovery of the greatest national and even international significance.

On October 7, 2010, this bronze helmet was sold at Christie's auction for nearly three and a half million dollars to an unknown private buyer. Only once, in 2012, it was on public display at the Royal Academy of Arts.

The most famous helmet is the "horned helmet" of Henry VIII that, along with a set of armor, was given to him by Emperor Maximilian I in 1514.

This helmet (the only part of the entire armor that survived to the present day) had a visor with a human face, and for some reason very twisted sheep horns. It was made by Konrad Seusenhofer from Innsbruck in 1512 and is undoubtedly an outstanding example of armor art of early sixteenth century. Likely it was only an original souvenir, a "royal gift," rather than a piece for combat actions.

The armor to this helmet was likely sold for scrap in 1649 during the Civil War in England. The remaining helmet was saved because it was stored separately. In the 17th century it was displayed at the exhibition in the Tower as part of the armor of Will Somers, a court jester of Henry VIII. For a long time no one knew who its owner was. Recently there were serious scientific debates about the authenticity of this helmet. For example, it is not clear whether the sheep horns were really a part of the helmet or whether they were added later. Most importantly, it is unclear why this odd artifact was a gift of one monarch to another.

On the other hand, it is possible that in this case the questions are inappropriate. During the period between 1510 and 1540 Maximilian armor was at the peak of popularity. Many helmets had visors depicting a human face, hence the desire of manufacturers to please their royal clients and make something special and original.

Japanese samurai helmets are also among very expensive helmets, some of them are not even that old, as evidenced by their prices at auctions of vintage Japanese armor and weapons.