Tolkien and the hobbit against the New World Order 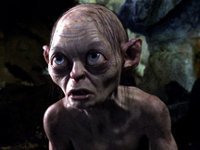 It is the innocent who kill and burn and break the peace. It is children who rush and smash and knock each other about and of such is the kingdom of heaven.

I think Chesterton is right: only the children dare to fight immeasurably and this is why they create the best kingdoms. They are not unobtrusive like the hobbits... This is why we must read and re-read LOTR.

The Lord of the Rings has many flaws, especially a big one which may infuriate the world censorship which threatens so much our liberties: it is a politically incorrect book. Much has been written about Tolkien alleged racism; for he enjoys describing heroes with tall statures, grey eyes or fair hair, while he is always depreciating dark, swarthy and squinted-eyes characters! Yet we must admit with economist von Hayek that these dramatic prejudices mainly come from mythology, sagas and fairy tales! Of course I won't have the energy to diabolize the great writer on that matter. There are enough well-intentioned people for that quest...

Also read: Tolkien and the Illuminati. The dark side of the Lord of the Rings

I prefer coming to one of my favourite chapters in his great work: the scouring of the shire in the return of the king, a rather long chapter narrating the guerrilla-type fight which oppose our dear hobbits to a bunch of "swarthy and squinted-eyed" invaders! In this chapter Tolkien deals concretely with one of the plagues of our modern world: nobody is at home anymore and the new world order settles whoever wherever. We can no more say "our people" as Aragorn did. Tolkien has already dealt in his masterwork with greed, mysteries, monsters, the all-seeing eye that symbolizes so well our NWO, yet he had to describe an ultimate fight, and a so risky fight that Peter Jackson didn't adapt it in his movie. Production argued that they had no time (in a nine-hour movie?) to direct that important episode, and I feel they rather had not the desire, which is easily understandable for a neutral product, a good you have to sell anywhere; for the politically correct agenda basically came with globalization and free trade. You have to respect any customer, haven't you? So don't say, don't write, don't shoot anything controversial; forget the past, forget the present, for it may lead to a scandal in the global shopping centre that has replaced the earth. Just sell junk.

Let's recap: the hobbits come home after the great victory and the destruction of Sauron and his vigilant great eye. But we know that in Tolkien agenda evil always subsists, even as a possibility. The shire has during their extended travel been occupied, ransomed and plundered by a bunch of ruffians, who seem to work for an invisible tyrant named Sharkey. This paradox upsets Pippin:

"Well I am staggered!" said Pippin. "Of all the ends to our journey that is the very last I should have thought of: to have to fight half-orcs and ruffians in the Shire itself-to rescue Lotho Pimple!"

The hobbits will then have to fight half-orcs and ruffians, and they will not hesitate; but what interests us the most is not the alien type of these assailers. It is rather their mission; and their mission is to collect, rob and destroy; build, arrest and command. It sums up the features of the worst capitalism and of the worst communism with all requisitions and commandments included.   Of course the first feature is the destruction of the landscape, connected with the real estate (by the way, mortgage means... dead pledge in French) speculation and building mania (a main characteristic of our globalization today, and everywhere, isn't it?)

Also read: Tolkien, the hobbit and the medieval revolution

This was Frodo and Sam's own country, and they found out now that they cared about it more than any other place in the world. Many of the houses that they had known were missing. Some seemed to have been burned down. The pleasant row of old hobbit-holes in the bank on the north side of the Pool were deserted, and their little gardens that used to run down bright to the water's edge were rank with weeds. Worse, there was a whole line of the ugly new houses all along Pool Side...

This goes too with ripping down trees, black smoke (think of the allusive name of a dragon, Smaug), dirt and pollution:

And looking with dismay up the road towards Bag End they saw a tall chimney of brick in the distance. It was pouring out black smoke into the evening air.

The hobbits raise the shire and hardly win back their freedom and try to get to the real point: how and why and by whom the things could be run so badly: They hate all this, you can see: all of them except perhaps one or two rascals, and a few fools that want to be important, but don't at all understand what is really going on.

This is like the industrial revolution, like Stalinism and like European construction today: how can we destroy our classes, our culture or our civilization unwillingly?  Well, just reckon greed, pride, sloth, all mortal sins in our tradition... A farmer named Cotton exposes Frodo the story: a guy named Pimple barely wanted more prosperity! I quote the full text since it's a wonder to explain our world.

- It all began with Pimple... He'd funny ideas had Pimple. Seems he wanted to own everything himself, and then order other folk about.  He was always grabbing more, though where he got the money was a mystery: mills and malt-houses and inns, and farms, and leaf-plantations.

-  Of course he started with a lot of property... Things began to get short and winter coming on, too. Folk got angry, but he had his answer. A lot of Men, ruffians mostly, came with great wagons... And more came. And before we knew where we were they were planted here and there all over the Shire, and were felling trees and digging and building themselves sheds and houses just as they liked.

The speed of the "improvements" is what amazes most Tolkien. And this destructive progress (creative destruction, as told infamous economist Schumpeter) means a privation of our liberties and a reinforcement of authoritarian governments. The cowardice and indifference of most is enough to complete the victory of the leaders' initiatives. Tolkien makes a hint to the sheriff of Nottingham:

- Then there was a bit of trouble, but not enough. Old Will the Mayor set off for Bag End to protest, but he never got there. Ruffians laid hands on him and took and locked him up in a hole... And after that, it would be soon after New Year, there was no more Mayor, and Pimple called himself Chief Sheriff... So things went from bad to worse.

- Finally came Sharkey, the biggest ruffian of the lot, seemingly... We've never seen him, but he's up at Bag End; and he's the real Chief now, I guess. All the ruffians do what he says; and what he says is mostly hack, burn, and ruin; and now it's come to killing. There s no longer even any bad sense in it. They cut down trees and let them lie; they burn houses and build no more.

We situate here famous and classical features: the rise of greedy capitalism, the will to power becoming a will to organize (as told Malraux); then the surge of the forces of police that create an insecurity of their own; and then the dictatorship of a faceless and mediocre personality, like that of our inauspicious European commissars... nothing new under the sun.

This is what the hobbits fight for, and some of them die for, and the shire is then granted freedom, prosperity... and golden hair kids!

I hope my readers will admit this chapter was worth a movie, not only a comment. I let Tolkien conclude... At a point, our author shows himself enough humour to criticize the quest he described and he defends instead a more specific and personal goal. Speaks the father of the good Sam:

And while you're been trespassing in foreign parts, chasing Black Men up mountains from what my Sam says, though what for he don't make clear, they've been and dug up Bagshot Row and ruined my taters!"

Don't ruin my taters. That would be a good lemma to finish this trilogy of articles and to defend oneself against any NWO.