Austrian mystic and occultist of the Third Reich Carl Maria Wiligut was Himmler's personal magician. He was appointed SS Brigadeführer for his prophetic revelations about the ancient Germanic past. However, Wiligut's views on the Aryan contrasted the Nazi doctrine. For this mystic, the Aryans were spiritual beings who came to Earth from the Moon. 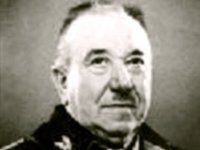 The mystic nicknamed Himmler's Rasputin for his comprehensive, yet brief impact on the SS Reichsführer, was born on December 10, 1866 in the capital of the Danube monarchy. Following family tradition (his father and grandfather were military), as a teenager Carl Maria was placed in the Imperial cadet school in Vienna. In December of 1884, he joined an infantry regiment stationed in Herzegovina. Wiligut was not only an officer, a dedicated employee of the Habsburg Empire, but also a person who enjoyed writing poems and was an esthete of ancient Germanic mythology.

Perhaps, for this purpose in 1889, he joined Schlaraffia society. Founded in Prague on October 10, 1859, "Shlaraffiya" cultivated friendship, encouraged arts and appreciated humor. The motto of the organization was "In arte voluptas" (In art there is pleasure). It is believed that the word Schlaraffe comes from Slur-Affe, which means "young scatter-brain" (sorgloser Genießer). People called them Lobesam - "poets."

A British expert on the occult roots of Nazism, Nicholas Goodrick-Clarke, emphasized that there is no evidence of the connection between Shlaraffii and pan-German movement, as well as there are no indications that Wiligut was connected with some nationalist organization in imperial Austria. In 1903 he made friends with Vienna völkisch - literally "people" - a racial-biological national-chauvinist movement associated with anti-Semitism and Ariosophy.

That year his book on ancient Germanic mythology Seyfrieds Runen ("Runes of Zeyfrida") was published. His poems were signed with his pseudonym Jarl Widar. Wiligut became a member of the Order of the New Templars (Neutempler-Orden, or Ordo Novi Templi (ONT) - an esoteric secret union founded by Jörg Lanz von Liebenfels.

After 20 years of service Wiligut was still in an infantry regiment, and was promoted to a major two years before the First World War. In October of 1914, the 47-year-old staff officer of the 30th Infantry Regiment took part in the fight against the Russian army in the Carpathians. In May of 1918 Wiligut was withdrawn from the front and appointed a commandant of the camp for convalescents in Lemberg (now Lviv). That event largely determined the fate of the future Nazi mysticism.

In June of 1918, the officers' mission was visited by the delegation of senior Catholic prelates, including the Apostolic Nuncio in Poland and the Baltic States, Cardinal Ratti (later Pope Pius XI). Wiligut told the clerics about the origin of his name and secret family tradition. General of the Jesuit Order whispered to the papal legate in Italian: "Cursed family." Then the officer yelled at the priest in anger. They say that after the meeting Carl Maria started experiencing seizures and attacks of deep depression.

In 1933 Wiligut joined SS where in three years he made a terrific career. The top leaders of the SS gave him honorary nickname Weisthor. Weis means initiated into mysteries, and Thor is the name of the god of thunder and storms. In 1936, Reichsführer Himmler appointed Wiligut an SS Brigadeführer. While for everyone the anagram of two SS runes meant Schutzstaffeln - "security groups", for the SS elite there was another explanation. Only the initiated understood this abbreviation as Schwarze Sonne - "Black Sun". According to the beliefs that originate in ancient Egypt and Sumer, there were two suns, the "white" one, which we see, and the "black" one, the hidden sun of spiritual enlightenment.

He was involved in the development of the SS emblem Totenkopfring (Ring "Dead Head"), worn by members of the "Black Order," and in shaping of the concept of the SS Castle Wewelsburg. Even modern historians know little about the engagements of "Himmler's Rasputin".

A specialist in the history of the Third Reich Andrew Vasilchenko stated: "The name Wiligut was not mentioned in the official publications of the SS or all-German media. All this points to the fact that Himmler and Wiligut were connected not just through service relationship but something more."

Wiligut's views on the Aryan sharply contrasted with the official Nazi racial doctrine. According to Carl Maria, they could become true Aryans discussed in the National Socialist ideology if they returned their long lost powers. For Weisthor the Aryans were spiritual beings who came to the earth thousands of years ago from the moon. They had the ability to return to their land of origin.

In August of 1939 Wiligut left his post either due to the wiles of other occultists of the Ahnenerbe, or because of poor health caused by old age, as noted in the official reason for the resignation. Himmler kept his magician's SS ring of honor "Totenkopf" and honorable sword (SS-Ehrendegen). Less than a month later Germany invaded Poland and World War II began.

At the end of the war Wiligut landed in a camp for displaced persons of the British occupation forces. From there he first returned to the Austrian Salzburg, but then went to the small town of Arolsen, now in Bad Arolsen in Hesse. There, on Christmas of 1945, 79-year-old Wiligut had a stroke, and passed away at 7AM on January 3, 1946.

Author`s name Dmitry Sudakov
*
17:35
Death toll from Turkey deadly quake rises fast to 1,100 and counting
18:54
Ukrainian soldier uses chainsaw and fire to release US howitzer from ice trap
18:30
Onet: Ukraine will lose in six months due to shell shortage
17:36
Russian troops defeat Ukrainian troops in Zaporizhzhia region
14:50
Number of foreign mercenaries in Ukraine continues growing
14:17
Russians buy more than 50 tons of gold in 2022
13:57
Russia will not talk to Ukraine. Russia will talk to the West
13:34
USA's plan to give 20 percent of Ukraine for peace hoax
12:51
Medvedev: Ukraine as a state to be devastated, go bankrupt and be turned into colony
19:57
Russia will use all of its military potential to counter Western arms supplies to Kyiv
Drone with large air bomb on board explodes over Kaluga in western Russia