The Colombian President Juan Manuel Santos said the timing is "ideal, astral," so there is a good direction to the peace process, initiated by the Revolutionary Armed Forces (FARC), which could be concluded in the next six or eight months. The conditions now are very different from those that dominated previously, he acknowledged.

"The world has changed and Colombia has as well. The whole world and also the region are supporting this process.  Hopefully this will be the basis for a happy ending," expressed the leader.

"I think the important thing is to focus on the basics, the five points of the discussion agenda approved by both parties."  Afterward, he stated that this process should be decent, serious, effective and realistic, and that, "There are things that are possible and others not."

"We're talking months, not years," he reiterated. "I hope that if there is the will, in six or eight months, we can say that we finished the second phase of negotiations, that is equal to saying that officially we ended the conflict," he affirmed.

In turn, FARC ratified, at a press conference held in Havana, Cuba, its position in favor of a peace that ends the armed conflict in Colombia, which went on for nearly half a century.

"For us it is very important to develop and to maintain this process because it meets the needs of the people," said the guerrilla commander, Marcos Leon Calarcá.

FARC also announced at the press conference in Havana the names of two of the leaders who will join the team of negotiators, Ivan Márquez and Jesús Santrich, and their intention to incorporate Ricardo Palmera, alias Simón Trinidad, sentenced to 60 years in prison in the United States, where he was extradited.

"We will not get up from the table until we have a happy outcome for the Colombian people," said members of the guerrilla group in charge of exploratory dialogue while underscoring the government's willingness to make structural changes to achieve this result.

"We hope that it is possible for Colombia to live in a peace, which we bring near with an agreement to truly promote peace building," indicated León Calarcá.

Another round of negotiations between the parties will begin next October 8 in Oslo, Norway. 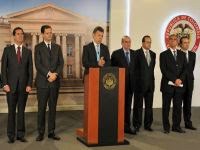