One hundred years ago, in late August of 1912, Franz Roubaud's panorama "Battle of Borodino" was first desplayed in Moscow. Paradoxically, the greatest painting of the major battle of the Russian Patriotic War with the French was created by a Russian born in Odessa who came from a family of a French merchant. He also supervised the creation of the panoramas of the defense of Sevastopol. 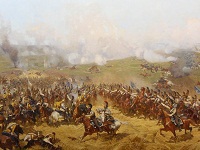 Interestingly, the Panorama "Defense of Sevastopol" was created under the direction of the French in 1902-1904 on the outskirts of Munich by a group of German artists. This panorama was successfully displayed in 1905 in Sevastopol in a specially constructed building.

The Panorama "Battle of Borodino" had Russian artists involved in its creation. This work of art has quite an unusual, even tragic fate. Despite the fact that the painting is 100 years old, it was unavailable to viewers for nearly half of its "creative life."

The giant canvas was commissioned to a famous artist Franz Roubaud by Tsar Nicholas II on the eve of the 100th anniversary of the War of 1812. The emperor's choice was logical, as Roubaud earlier directed the development of large-scale panoramic paintings "Defense of Sevastopol" and "Storm of Ahulgo Village."

On the initial sketch, the author of the "Battle of Borodino" showed a fierce battle for the key point of the battlefield - Kurgan battery of General Rajewski. However, shortly the sketch was rejected by the Tsar.

According to historical sources, one newspaper wrote at the time: "The battle for the Kurgan battery gave the artist a chance to depict the Russian troops from the best side, to show their skill. The Special Commission invited the artist to portray a different point in the battle: noon, when massive cavalry charges of the Napoleonic cavalry started on the Russian positions."

As the panorama was created at the time of the union of Russia and France, the government did not want a conflict with the former mortal enemy because of the "political" reasons. The authorities forced the artist to choose a panorama scene already embodied in the "Battle of Borodino" by French artist Langlois. "I am doing this for the Russian panorama, and I am forced to paint the French triumph," Roubaud complained. The work on the canvas measuring 14 by 115 meters took nearly a year.

The panorama was displayed on August 29, 1912 in a specially built pavilion on Chistye Proody. It was not exhibited for very long. The First World War has started, and the access to the relics was stopped, and a hospital was placed in the building housing the panorama.

By the spring of 1918, the temporary wooden pavilion dilapidated, and the canvas was removed, folded on a wooden shaft and taken to a warehouse. Nearly for 40 years it was kept under terrible conditions, sometimes in the worst places - a scenic platform of Neskuchnyi garden, the basement of Miusskaya Cathedral, in the garden of "Aquarium", in the theater of "Hermitage" and other totally unsuitable places.

In 1934, the People's Commissariat of Defense raised the question of the restoration of the panorama "Borodino". In 1939, art restorers for the first time in over 20 years fully unfolded and carefully examined the canvas, and concluded that it was impossible to restore. The painting of the sky was almost completely lost, and the canvas was torn and worn in many places.

However, Joseph Stalin insisted on the restoration because during the Great Patriotic War he used to think about the heroes of the Patriotic War with the French.

The heroes were kindly mentioned in the media, including representatives of the noble class such as Bagration, Rajewski, Barclay de Tolly. The morale of the Soviet troops was stronger because of it.

On Stalin's order, in 1946 a thorough examination of the canvas was carried out, and the decision on its restoration was made. On September 29, 1948, the Council of Ministers of the USSR issued a special decree. The work was commissioned to the Central Art Studios.

Despite the prophecies of skeptics about the impossibility of restoring the panorama, it was restored by the end of 1950. The debate about its placement was initiated since it was not easy to find a space big enough to house the painting.

While the search for the place to exhibit the panorama was ongoing, the initiator of restoration, Joseph Stalin, passed away. The canvas stayed in the Museum of Fine Arts named after Pushkin for a few years. The historical painting was once again damaged - even the museum could not create the conditions for its storage.
The great panoramic canvas got lucky again.

General Secretary Nikita Khrushchev, like his predecessor Stalin, with the filing of the officials of the Ministry of Culture remembered about the panorama "Battle of Borodino." Finally, in anticipation of the 150th anniversary of the War of 1812, in 1960, the Soviet authorities decided to complete the rehabilitation of the panorama and construction of a new building to house it.

The restoration was carried out in the State Central Scientific and Restoration workshop. The construction of the room for the panorama "Battle of Borodino" was started in 1961 on Kutuzov Avenue, where an entire historical memorial complex dedicated to the War of 1812 was being formed.

This was not the end of the misadventures of the famous canvas. On June 27, 1967 there was a fire in the panoramic room. Once again, the canvas had to be restored. This time the work was carried out by the masters of the War Art Studio named after Grekov.

In 1990 -1995 the museum-panorama was completely renovated. Currently, the main fund of the museum houses over 27,000 items, while the scientific fund houses over 8,000 items.

The great canvas is kept on Tverskaya Street to this day. There is no doubt that on the days when Russia celebrates the 200th anniversary of the World War II the exposition of the panorama "Battle of Borodino" is one of the most visited.